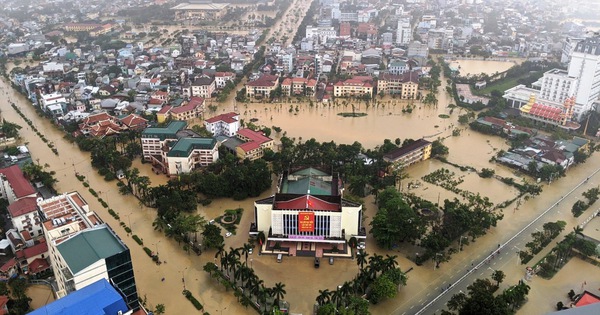 Hue city was flooded in sea water due to high floods and prolonged heavy rain – Photo: TON of force

On October 12, the People’s Committee of Thua Thien Hue province had an online emergency meeting with localities to cope with the complicated situation of rain and flood.

According to the report of the Steering Committee for Natural Disaster Prevention and Search and Rescue in Thua Thien Hue Province, floods in Hue rivers are slowing down. Specifically, at 10am of the same day, the water of Huong river reached 3.49m; water on Bo River down to 5.06m. It is forecasted that on October 12, floods in rivers will continue to fall.

Although river water has decreased, heavy rain combined with expected high tide continues to persist, causing many parts of the province to continue to be partially flooded.

Thua Thien Hue province requested that on October 12, the military force must at all costs use special means such as canoes, amphibious vehicles … to approach and bring food and drink to people. in areas isolated by floods for many days such as Hai Duong commune, Huong Phong commune (Huong Tra town) …

Thua Thien Hue Provincial Military Command said the Ministry of Defense sent a mission to Hue to understand the flood situation. On the basis of local proposals, the ministry will send reinforcements and special military equipment to go to Hue to support people in high flood areas if needed.

Currently the mission is in Quang Binh.