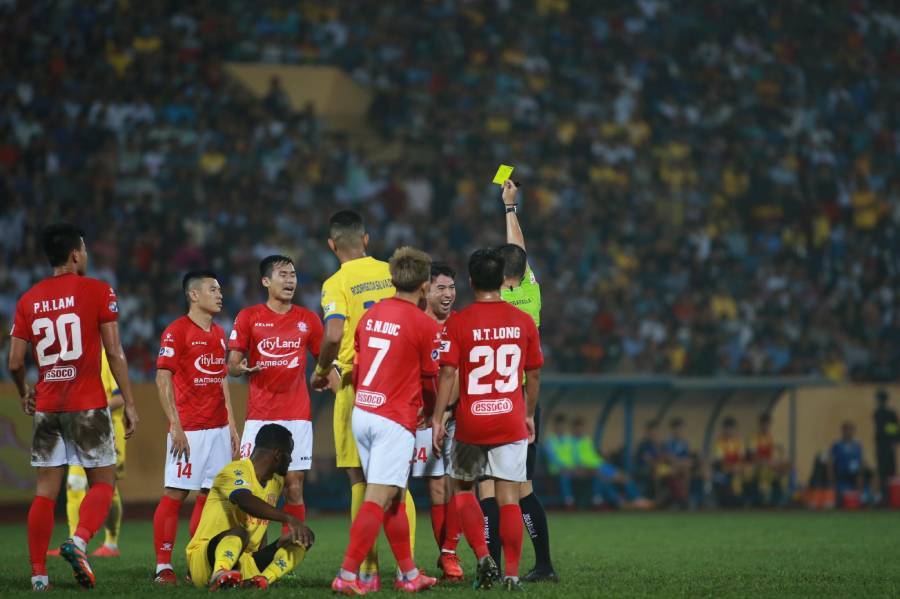 Lee Nguyen’s red card not only made HCMC club lose people in round 11 of the LS V-League, but also revealed many problems of the V-League’s most “brutal” team.

With a red card that was indirectly received in the defeat against Nam Dinh, Lee Nguyen was suspended when the Ho Chi Minh City club played Viettel at Thong Nhat Stadium.

This is a huge loss for coach Polking’s team in the context of desperate need, as well as Lee Nguyen who is the best at the HCMC club so far.

The loss of people has been done, but the red card of a Vietnamese-American player with two nationalities also brings a not so good “conspiracy theory” for the HCMC club.

Many people believed that Lee Nguyen’s jump to avoid collision was an accident, but many people thought that the extra leg that this midfielder gave a Nam Dinh player was on purpose.

It is said that Lee Nguyen seems to feel too tired and depressed, so he needs to rest after the bad matches of the home team. Exactly, it is as a way of showing dissatisfaction that the 34-year-old midfielder for the HCMC club.

Although Lee Nguyen does not want to believe this because Lee Nguyen is considered very professional, there are grounds to believe that that “conspiracy theory” is correct when a Vietnamese-American player is too lonely at the HCM City club after the game. past.

to the “common father” story at the HCMC club

If the story of “deliberately” getting a card to get out of the field pulling a tired train like the Ho Chi Minh City club of Lee Nguyen is true, the reality is not surprising.

During the eight matches that Lee Nguyen was on the field, the midfielder almost alone took on the playing style of coach Polking’s army in the context that the domestic players were not good, at the same time the remaining 3 foreign soldiers said it. was … bored.

Bored, unable to meet the expertise, it will have to be replaced, that is normal and with the Ho Chi Minh City Club even more familiar. Simply because in the last few seasons with the size of 100 billion VND / season, the City football team has changed more than changing clothes, let alone foreign soldiers.

Only thing in other teams when replacing personnel often has to be better than before, but at the HCMC club it is not, if not worse. Therefore, one can question who advocates the purchase of players, where is the ending and, most importantly, who evaluates the quality of the player to be so shallow.

A question thought easy to answer for other teams, but the club in Ho Chi Minh City is very difficult. Because this team does not seem to have a clear structure, despite the fact that it has been assigned a stable role in the past few seasons.

So it is not surprising that there are rumors about “your army, my army and our troops” at the HCMC club in selecting players over the past few seasons, making the team considered the best in the V-League yet. Can get up even though he spent very aggressively.

Ho Chi Minh City club is about to replace the three “west”, but who ensures the “million dollar” new recruits are going to succeed. Last season and this season, when the City team was not violent and noisy when launching a new foreign soldier ..