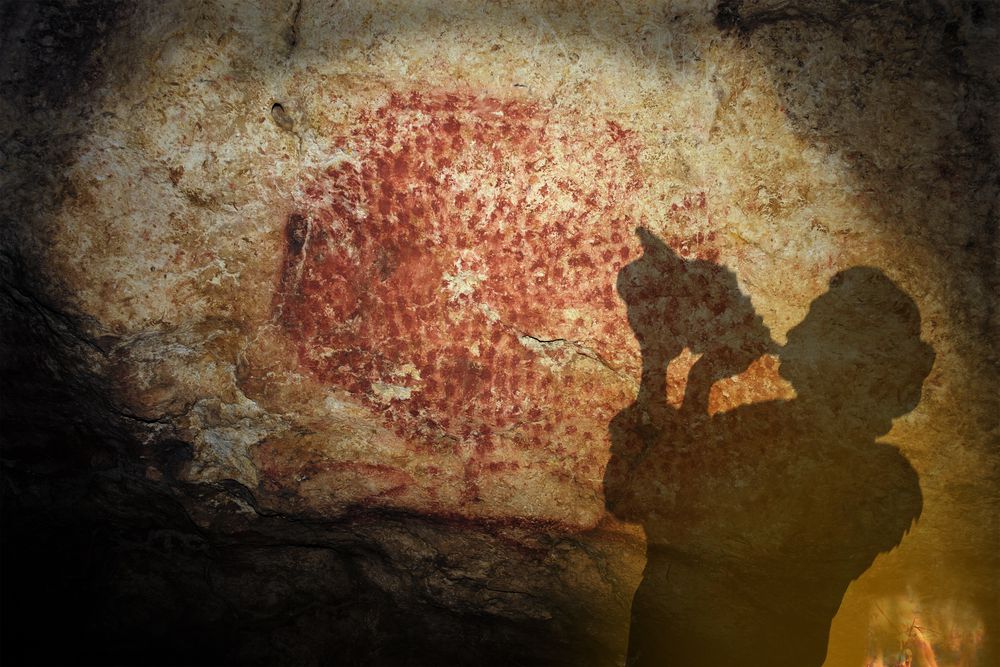 There is no society without song. There is, either, no ritual, party or ceremony without music. Archaeologists and anthropologists who study the production of sounds in ancient communities agree on this. Carole Fritz, from the French National Center for Scientific Research, and Gilles Tosello, scientist from the Research Center for Prehistoric Art in Toulouse, have recovered an 18,000-year-old seashell shell that confirms the primitive and inseparable relationship between sound and beings humans. This instrument, discovered in the decorated cave of Marsoulas, in France, belonged to the Magdalenian culture, one of the last groups of the Upper Paleolithic in Western Europe, and is the oldest known snail-shell horn to date.

To verify the possible musical use of this white shell, 31 centimeters long and 18 wide, the researchers asked a musician specialized in wind instruments for help, who was able to reproduce the sound of this kind of trumpet in three notes. distinct that almost coincided with the pitches of C, D and C sharp in modern musical nomenclature (C, D and C sharp). Tosello, a prehistorian and specialist in parietal art, explains that it was the first time “in more or less 18,000 years that the shell sounded.” “Our musician tried to produce notes, as he does with his instrument, and he succeeded. However, nothing confirms to us that the instrumentalists of that time played fixed notes, or that tones and semitones existed ”, says Tosello.

Tosello and Fritz’s research findings, published Wednesday in the journal Science Advances, shed light on a musical dimension hitherto unknown in Paleolithic European societies. “This work allows us to put sounds about an era that we only know with drawings and objects. We do not have any information on the spoken language, on the songs or on the acoustic context of that culture. With this shell we can hear what that moment in history sounded like, ”says Tosello.

The horn was first found in 1931, but the initial discoverer suspected that it served simply as a ceremonial cup for drinking water. Since he did not observe any human modifications, he kept it in the collection of the Museum of Natural History in Toulouse and did not study it again. Several decades later, Fritz, Tosello, and other researchers analyzed the shell with advanced imaging techniques and determined that the Magdalenians who inhabited Marsoulas Cave had carefully modified the shell to install a mouthpiece. “These ancient craftsmen also removed the edges of the flared ridge that extends outward from the main opening of the shell and adorned the exterior with ocher-red pigment designs that match the style of wall art found within Marsoulas. ”, The researchers explain.

Carole Fritz says that she and Tosello have been working in the cave for 20 years to study rock art. “For us it is essential to study what is painted on the walls and the objects found around it. It was by reviewing the cave collections that we rediscovered the shell ”. The scientists used photogrammetry, the technique that precisely defines the shape, dimensions and position in space of any object, to highlight exterior modifications that are not easily seen with the naked eye. They then used CT scans to visualize the inside of the carapace, and found that two additional holes had been cut in the spiral layers below the apex of the shell, perhaps to accommodate the extension of the long tube of the mouthpiece. “All this work was done with the aim of thoroughly characterizing the traces of human intervention,” explains the scientist.

Fritz and Tosello acknowledge that different previous investigations have documented the presence of flutes and bone whistles in archaeological sites of the Upper Paleolithic, but insist that instruments made with other materials such as this shell, which belonged to a large marine snail of the species Charonia lampas, they are very scarce. “We knew that hunter-gatherers of the time could make music. We have known flutes since the Aurignacians 35,000 years ago. The shell is certainly more recent, 18,000 years old, but it confirms that the populations of the northern slope of the Pyrenees entered into a relationship with the Atlantic coast ”, says Fritz. And he continues: “We know that the Magdalenians of Marsoulas had links with the Magdalenians of the Cantabrian coast. The shell consolidates these contacts. They take the sea inland, to the bottom of the cave ”.

According to scientists, this shell also shows the ability of ancient human groups to transform a complex object into a wind instrument. “We still have to meditate on the role of sound in the Paleolithic, but we can say that the relationship between music and human symbolism is very strong. In Marsoulas it is difficult not to draw the parallelism between sound and rock art. Shells have served as musical instruments, calling or signaling devices, and sacred or magical objects depending on the cultures, ”the authors write. And they conclude: “As far as we know, the Marsoulas shell is unique in the prehistoric context, not only in France but on the scale of Paleolithic Europe and perhaps the world.”