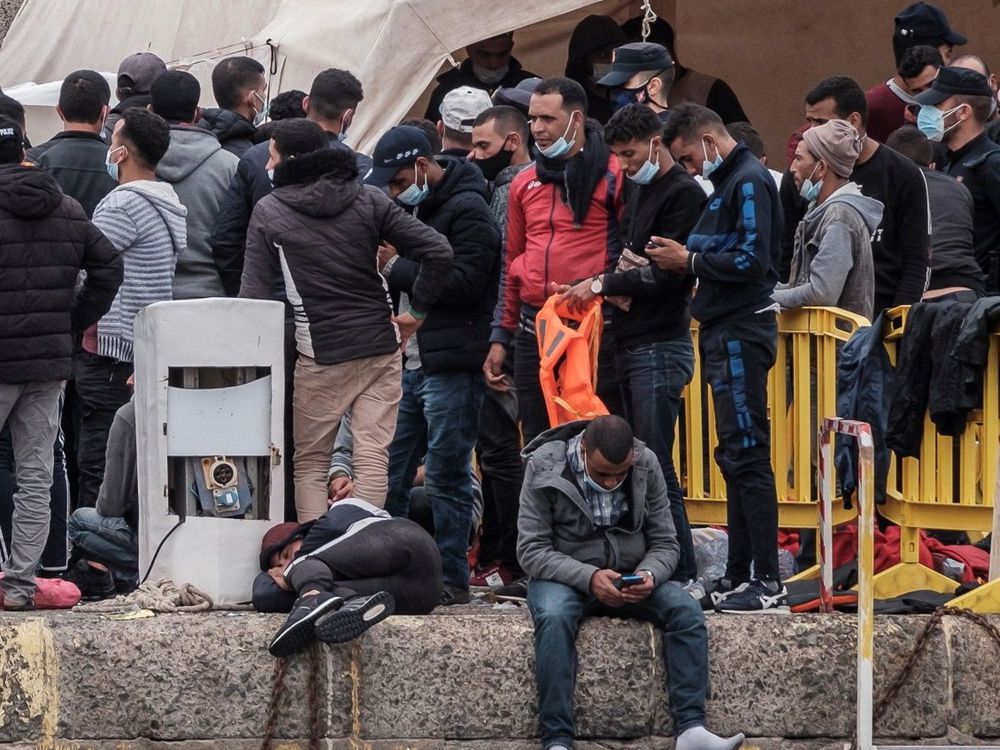 The arrival of boats to the Canary Islands continues to increase. The rescue, late this Sunday, of 28 migrants, most of them Maghreb, nine miles south of Gran Canaria is the latest episode of a situation that has been getting worse since before the summer. Of the people rescued in the latter, only one required health care and was transferred to a hospital, as reported by 112. The rescue, carried out by Salvamento Marítimo, brings to 1,347 the number of migrants who have reached the the coasts of the archipelago last weekend, and the port of Arguineguín, southwest of Gran Canaria, has collapsed again. According to Cadena SER, several technicians from the Ombudsman have visited the controversial camp this Monday to collect testimonies about the humanitarian and legal conditions in which these people find themselves.

More than 2,000 migrants sleep on the dock and for months different humanitarian organizations have denounced their dire conditions there. The Minister of the Interior, Fernando Grande-Marlaska, who visited the islands last week accompanied by the European Commissioner for the Interior, Ylva Johansson, again insisted this Monday on Public mirror that the migrants will be distributed in up to five military areas. The Interior Minister also assured that migrants “do not spend more than 72 hours” in the port of Arguineguín, a statement that has been denied by both the control judge of the Center for the Internment of Foreigners (CIE) of Barranco Seco, Arcadio Díaz Tejera, who assured on November 12 that there were people who had been there for more than 24 days, such as Judith Sunderland, representative of the NGO Human Rights Watch (HRW), who denounced on November 11 that the conditions of the dock camp de Arguineguín “did not respect” the dignity of migrants, and specifically cited two women from Mali who showed him evidence that they had been on the dock for more than two weeks, sleeping on the ground and with the only protection of a tent .

The Canary Islands Coalition has requested this Monday the resignation of the minister, considering that “it is a falsehood” that migrants do not spend more than 72 hours in the port of Arguineguín, as stated by the Interior Minister in the interview on Antena 3.

The Government’s concern about the situation generated in the islands has been increasing and last Friday the Minister of Territorial Policy, Carolina Darias, announced a series of “extraordinary measures”. Among them, the commitment to greater police control in cooperation with countries of origin and transit, the promotion of forced returns and an expansion of reception places with the installation of temporary tents in these military complexes stands out. In the old Barranco Seco powder keg, with a capacity for 800 people, Interior will carry out the police review and custody of the newcomers during the first 72 hours, which is now done in Arguineguín.

Grande-Marlaska is scheduled to visit Morocco on November 20 to discuss the migration issue with his counterpart Abdelouafi Laftit. In addition, seven agents from Frontex, the European agency for border control, will provide support to police officers in the Canary Islands. The government is also in talks with the agency to launch a joint surveillance operation in Senegal.

So far this year, more than 17,000 migrants have landed in the archipelago, a figure more than 10 times higher than that registered in all of 2019. The last month has been especially dramatic. On October 15, the number of immigrants arriving on the islands was just over 8,000. But that number has doubled in just one month.

The heads of the International Organization for Migration (IOM) and the UN Refugee Agency (UNHCR) in Spain have started a joint visit to the Canary Islands this Monday with the aim of gathering information and assessing the context to identify and develop areas collaboration and institutional support. The UNHCR representative, Sophie Muller, and the IOM Chief of Mission, María Jesús Herrera, will hold several meetings with public authorities and other institutions and organizations of Canarian civil society until this Wednesday.

Both UN agencies will focus on the field of reception, identification of the profiles and needs of newcomers, as well as locating people with international protection needs. They will also deal with all aspects related to the fight against trafficking in human beings and those related to the human rights and fundamental freedoms of migrants, regardless of their administrative situation in Spain. The IOM has announced its intention to bring two delegated officials to the Canary Islands and Almería respectively, two hot spots for irregular immigration in Spain.

In the statement issued this Monday, both organizations have been convinced that this “rapid increase” in arrivals to the Canary Islands can be “managed through solidarity policies and with a human rights approach.” In his opinion, it is “essential to provide an adequate response to current needs, counting on political will and a coordinated response between the entities and the different competent administrations”.