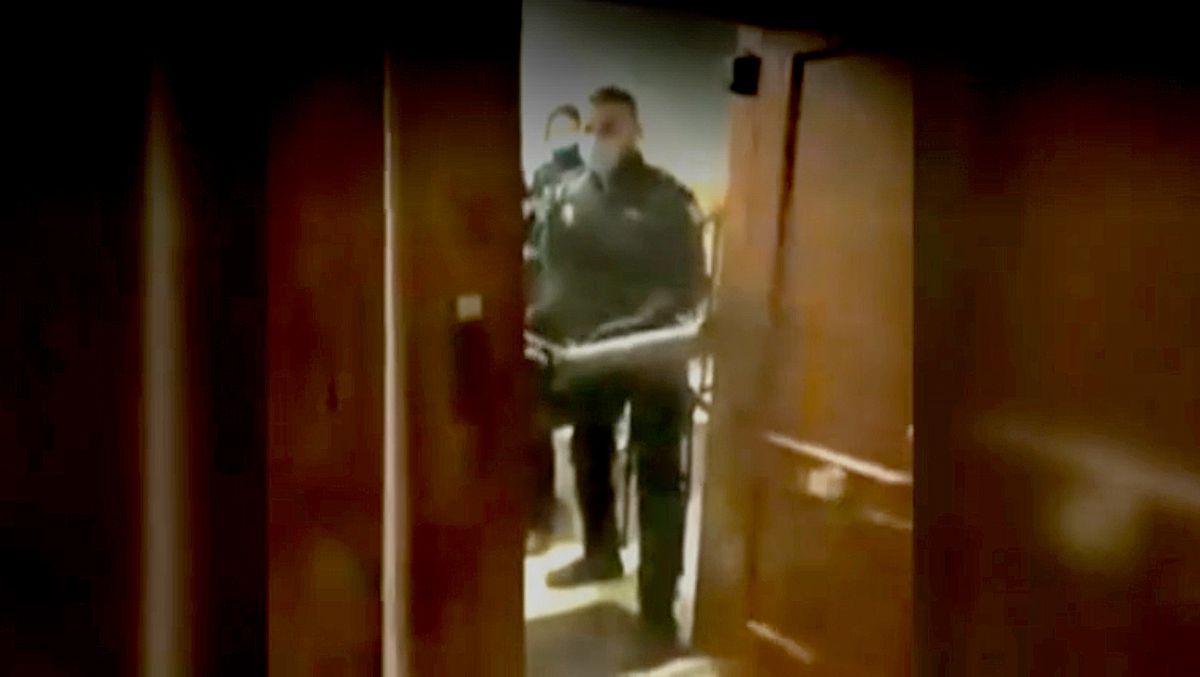 
The images of policemen breaking down the door of a house in Madrid on March 21 to identify the 14 people who were celebrating an illegal party have generated controversy. Both in the report of the incident and in another similar one a day later, the agents alleged that they entered without a judicial order protected by the citizen security law and an internal order issued days before by the Interior to apply the measures agreed by Health and the communities to stop covid-19. Various jurists call the performance “disproportionate”.

These two illegal parties in which the Police intervened were held in Madrid on March 21 and 22. The first police action began shortly before one in the morning, when six agents went to a house on Lagasca Street alerted by a neighbor. In the video, broadcast on social networks, a young woman is seen refusing to open the door to the agents if they do not carry a court order. After an exchange of words, the police force the door with a battering ram. The 14 people who were inside were proposed for sanction for failing to comply with health measures against the pandemic. Of these, nine were arrested for alleged gross disobedience.

The incident the following day also had a similar development, although this time the agents managed to cross the entrance by calling slip method (insert a plastic sheet between the door frame and the latch or latch to open it without forcing the lock), according to the police report. Several of the participants were accused of serious disobedience, although the judge finally closed the case against the person who rented the house, considering that he did not commit a crime but an administrative offense. Three of the six police officers involved in this incident had participated in the one the day before, according to police documents.

In both police reports, the agents assure that their actions were covered, in the first place, by articles 9.13 and 16.1 of the Citizen Security Law (known as gag law and which was endorsed by the Constitutional Court last January), which authorizes agents to identify people when there are indications that they have committed an offense and forces them to identify themselves to the agent; as well as article 16.5 of the same law, which states that if they do not do the latter, they could incur a crime of serious disobedience “that would make their arrest possible.” The agents assure in the reports that the crime of disobedience (to be opened and identified) was being committed in a “flagrant” manner and that, therefore, in accordance with article 18 of the Constitution and 533 of the Criminal Procedure Law ( that collect exceptions in which entry into a home is authorized without a court order) entered the flats.

The reports, with identical paragraphs, emphasize that the agents did not request the judicial order of entry due to “the urgent need to intervene to arrest the perpetrators and prevent the spread of the evil that the criminal offense entails, specifically to protect the right to rest and the tranquility of the neighbors, as well as, above all and especially, protecting public health ”. And they highlight the consequences that, “in case of delaying the intervention”, it could have had for the participants in the party themselves, “since the time of exposure to the virus, in case there is a more than possible contagion inside is directly related to the risk of contracting the disease ”.

Both documents refer to an official letter from the Deputy Directorate of Operations of the National Police, headed by Commissioner José Ángel González, sent on March 16, in which instructions were given to the agents to “establish the necessary operational devices, to ensure compliance with the measures and recommendations ”agreed, six days before, by the Plenary of the Interterritorial Council of the National Health System for the periods of March 17 and 21 and March 26 and April 9, coinciding with the bridge San José and the holiday period of Holy Week. This newspaper has tried to access the content of this job without success.

Official sources from the General Directorate of Police and the Ministry of the Interior have declined to comment on the actions of the agents as the second of the incidents is still under judicial investigation. Other sources consider that the intervention has been endorsed by the judge, since before the habeas corpus (request of a detainee to be released considering that his detention has been illegal or arbitrary) raised by one of the young women who starred in the incident that was recorded, the judge has considered that the detention was adjusted to the law.

Police Justice (Jupol) and the Unified Police Union (SUP), the two most representative organizations of the agents, also defend the actions of the agents. Carlos Morales, SUP spokesman, considers that the controversy only seeks to “demonize police work without knowing its circumstances and always excusing the attitude of those who precisely and selfishly put us all in danger in the midst of the pandemic.” For Pablo Pérez, from Jupol, “there has been no irregularity in the actions of the police”.

Very different is the opinion of the lawyer Juan Gonzalo Ospina, who defends two of the nine young people arrested in the first incident. Ospina has announced that it will request the file of the actions against its clients and qualifies the arrests as “illegal”, so it does not rule out starting criminal proceedings against the agents who participated.

The legal experts consulted are also critical of the judicial action. For Alberto López Basaguren, professor of Constitutional Law at the University of the Basque Country, the entry of the agents into the house was not justified: “If whoever owns the house, whoever rented it, did not voluntarily allow the entry of the police To gain access by force, the agents could only do so if they had express judicial authorization, ”he says. Basaguren rules out that the house, due to the fact of being a tourist apartment, should not be considered a dwelling and, therefore, subject to special guarantees: “Home is any place where a person lives, even temporarily, such as a a pension, a rented apartment or even a caravan, as established by the Constitutional Court ”. The professor at the University of the Basque Country concludes that “the agents should have requested judicial authorization or refrain from accessing the house.” And he adds that in order to identify the people who participated in the party “they would have had to wait for the people to leave the house to do so.”

In similar terms, the criminal lawyer José María de Pablo expresses himself, who calls the entry “disproportionate” and considers that “there are indications of breaking and entering” by the police. “That the crime of disobedience was serious instead of slight is already debatable, but what seems evident is that it was not flagrant and, therefore, it was not urgent to enter the house,” says this lawyer. De Pablo recalls that for crimes much serious than disobedience, such as suspicions of drug trafficking, “the agents request a judicial authorization” and emphasizes that “an illegal party is not a sufficient reason to enter by force in a living place”. The also lawyer Antonio Segura, from the Actívate-Red de Abogados collective, emphasizes the same idea and criticizes that the state of alarm has given rise to “legal shortcuts”. “The police should have sought other less harmful means to identify people and punish them.” Which one? “Wait for them to come out.”

Proportionality in action is the legal key

Police and public order action against risky behavior during the pandemic is giving rise to a permanent debate when there is a collision of rights, or when it comes to dealing with administrative offenses. The use of a domicile for parties would fit into one of the latter assumptions. But it is necessary to take into account as a priority rule the need to always act with proportionality.

The force acting in the events on Lagasca street in Madrid relies on article 16.1 of the Citizen Security law to explain the legality of its identification requirement to those gathered in that tourist apartment, after being denounced by a neighbor. Now, that same article says in its section b that “in the practice of identification, the principles of proportionality, equal treatment and non-discrimination will be strictly respected.”

The Constitutional Court ruled on the aforementioned law last December, and did not object to the aforementioned provision, aware that in the current situation of the pandemic it was not necessary to restrict the ability of the forces of order to prosecute administrative offenses related to the endangered public health. For this reason, a few months earlier, in April of last year, the guarantee court itself endorsed the suspension of a demonstration, thus resolving in that case the dilemma between the exercise of a fundamental right and the preservation of health.
But the Constitutional Court underlined the concept of proportionality in general, also in the face of action on the fences of Ceuta and Melilla. Now, in the case of Calle de Lagasca, it is difficult to sustain that the use of a ram to enter the floor of a party – prior repeated request for the attendees to open the door – was an action of urgent necessity and proportionate to the gravity of the facts.

The consideration that the disobedience of the congregants was serious could lead the agents to request a judicial authorization or to prepare an operation to control said people when they decided to leave the apartment. It must be taken into account that the inviolability of the home is a constitutional right, although in this case it is a temporary residence, such as a tourist apartment. And another relevant fact is that the ruling annulled the possibility of censoring the taking of images of police actions. / JOSÉ MARÍA BRUNET