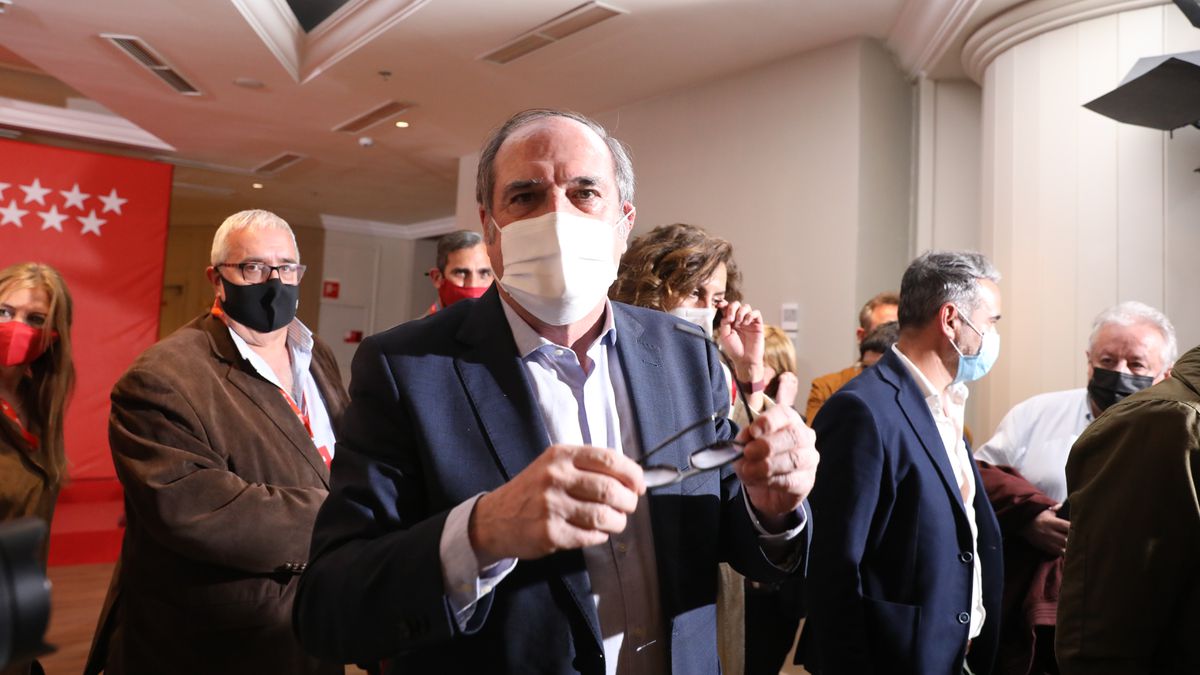 
The pressure on the PSOE for Ángel Gabilondo to resign from the act of deputy in the Madrid Assembly, which is constituted on June 8, grows as the socialist debacle of 4-M is assimilated. The candidate does not consider resigning after signing the worst result of the Socialists in the region with 13 deputies and 275,000 votes less than he obtained in his 2019 victory. José Manuel Franco, general secretary of the PSOE in Madrid, refused to resign in the meeting of the regional executive this Wednesday. Relevant members of the electoral list are in favor of the resignation en bloc of the Madrid management and a manager until the autumn congress.

The PSOE of Madrid has plunged fully into the internal struggles that have earned it national fame. The disbelief over Tuesday’s debacle, in which Más Madrid overtook the socialists on the left and became the new benchmark for the opposition, has given way to the latest reissue of the traditional quarrels between different families, clans and sub-clans of a federation with a reputation for being ungovernable. While the tension over the electoral fiasco and the search for responsibilities reopened the socialists on the channel, Mónica García took a run for the 2023 elections. The Más Madrid candidate had an act in Orcasitas, in the working-class district of Usera, in the one who defended “another type of politics” and “a decent alternative that puts Madrid in the center”.

The spigot was opened by Gabilondo after one in the afternoon. Faced with rising voices calling for him to take a step back to facilitate the construction of a new alternative project to Isabel Díaz Ayuso as soon as possible in the 2023 elections, his team reported that its purpose remained unchanged: to collect the deputy certificate and continue working in the Madrid Assembly. In no case resign.

Gabilondo thus reaffirmed himself against the growing sentiment in the Madrid federation. But also in Ferraz, and even among his relatives. “There has to be a gesture behind what has happened. We cannot act as if nothing had happened ”, opined a significant member of the electoral list. “Your presence in the Assembly will leave us in an impossible situation. If he is the spokesman, we will give the image that we have not reacted, and if he is not, Ayuso will use him to wear down whoever assumes the spokesperson ”, pointed out a leader who has a good relationship with Gabilondo since he headed the PSOE’s candidacy in the elections of 2015.

However, several general secretaries of groups were in favor of the continuity of Gabilondo in the Assembly. According to its defenders it would serve so that the PSOE had time to rebuild itself. To make an orderly transition, they argued, Gabilondo could be president of the parliamentary group. This is a figure that the Socialists have always had, except for this legislature. But in no case could he continue to be the spokesperson, said sources. The bench is not deep and the options would be reduced to Hana Jalloul, number two of the candidacy, or Juan Lobato, number four.

The former Secretary of State for Migration has the support of Sánchez, although he does not have organic weight. Lobato, who resigned before the start of the campaign as mayor of Soto del Real, does know better the ins and outs of the Madrid PSOE, a federation with a reputation for being untamed. Lobato is one of the names that are being used for the renewal of the autonomous leadership of the party. In fact, he already appeared in the 2017 primaries, in which Franco won. Six months before the regional congress, one of the very few certainties in the PSM is that no one has enough organic power to propose an alternative to what Sánchez decides for the federation to which he belongs.

Meanwhile, the colossal disaster of the Socialists on 4-M continued this Wednesday without having any responsibility. Unlike Pablo Iglesias, who resigned the same election night —Unidas Podemos grew by three seats and 80,000 votes—, in the PSOE no one presented his resignation. Critics who demanded the assumption of responsibilities in the regional executive that was held in the afternoon – among them were cadres who were left out of the electoral list – did not see their expectations fulfilled. The head of the Madrid federation and Secretary of State for Sports, José Manuel Franco, reaffirmed himself in office, according to sources from the telematic meeting transferred to EL PAÍS. His intention is to continue leading the federation until the regional congress in the fall. Franco was in favor of “changing teams” and taking “drastic but calm” measures.

The mayor of Alcorcón, Natalia de Andrés, and the mayor of San Fernando de Henares, Francisco Javier Corpa – the only two councilors of a direction formed by fifty members -, according to sources from the meeting, asked for the resignation of the executive en bloc, the formation of a manager and an extraordinary congress without waiting for autumn. Other interveners questioned the strategy followed in the campaign.

The Socialist Left, a minority current within the Madrid federation without the strength of the past, required the resignation of the regional executive, considering it “an active subject of this historical failure, although they are not the only ones responsible for it.” His Madrid permanent commission also demanded that Gabilondo resign from the act of deputy “thus initiating, with his gesture, a process of renewal of positions and policies so necessary for the socialists but above all for the citizens.”

“A defeat we did not expect”

In Ferraz they do not contemplate in principle a manager. What they do open up, with greater or less dissimulation, is to deepen the renewal undertaken in the electoral list. “We have suffered a defeat that we did not expect,” acknowledged the first vice president of the Government, Carmen Calvo, who called for reflection and self-criticism after the defeat “without ambiguity” of 4-M. “The socialists of Madrid have in these two years a double task: to exercise the leadership of the opposition with responsibility so that the vaccination ends with order and an economic recovery is undertaken that benefits those who need it most. And also, to fine-tune and renew our organization for the ordinary elections scheduled for two years from now, ”said José Luis Ábalos, Minister of Transport and Secretary of Organization of the PSOE, on election night. “We have two years ahead of us to build the progressive alternative that Madrid needs. We will know how to take advantage of them. And we get to it from this moment, “added the Number Three of the PSOE after following from Ferraz the appearance without questions of Gabilondo.

“Obviously the results are not good and we did not expect them. We were confident that what we were proposing would have been able to break through and this has not been the case, ”Gabilondo acknowledged at the hotel, 500 meters from the PSOE headquarters, in which he followed the outcome of the night. Among the thirty members of the list and party officials who accompanied him – some avoiding camera shots so that, unlike what they were looking for during the campaign, they would not be seen near the headliner – there were those who hoped that Gabilondo announced his resignation from the seat that same night. It was not so. “We will analyze, we will reflect, we will see what we can do to give a better response to what Madrid society wants, but it has been a source of pride, and it remains a source of pride to be representing the PSOE,” concluded the socialist candidate in the last three elections. autonomic.

One of the fears in the headquarters of the PSOE and also in La Moncloa is that the lack of a forceful response ends up concentrating all eyes on Pedro Sánchez. The Prime Minister and Secretary General of the Socialists was personally involved in the design of the lists. The campaign strategy was also decided at the highest level, which went from trying to contest the Cs vote to an abrupt turn in favor of agreeing with Iglesias after closing to that option throughout the pre-campaign and the first half of the campaign. The leadership of the PSOE in Madrid had little room for maneuver. “We simply let ourselves be carried away”, they sentence in their executive.

In the midst of this volcanic scenario, the PSOE was still in a state of shock for a result that no one anticipated. The trackings Internal elections came to give the Socialists ahead on the eve of the appointment with the polls, after four days in which according to the data that the left and right blocks were tied. The contrast could not be greater with the surveys that they handled in the PP. In the end, these were the right ones. The PSOE faced the decisive moment of the campaign with navigation charts far removed from reality. And after winning the 2019 elections, being the first force in 109 of the 179 municipalities of Madrid, it was relegated behind Más Madrid and was only the most voted party in Fuentidueña de Tajo (2,000 inhabitants) and El Atazar (100).