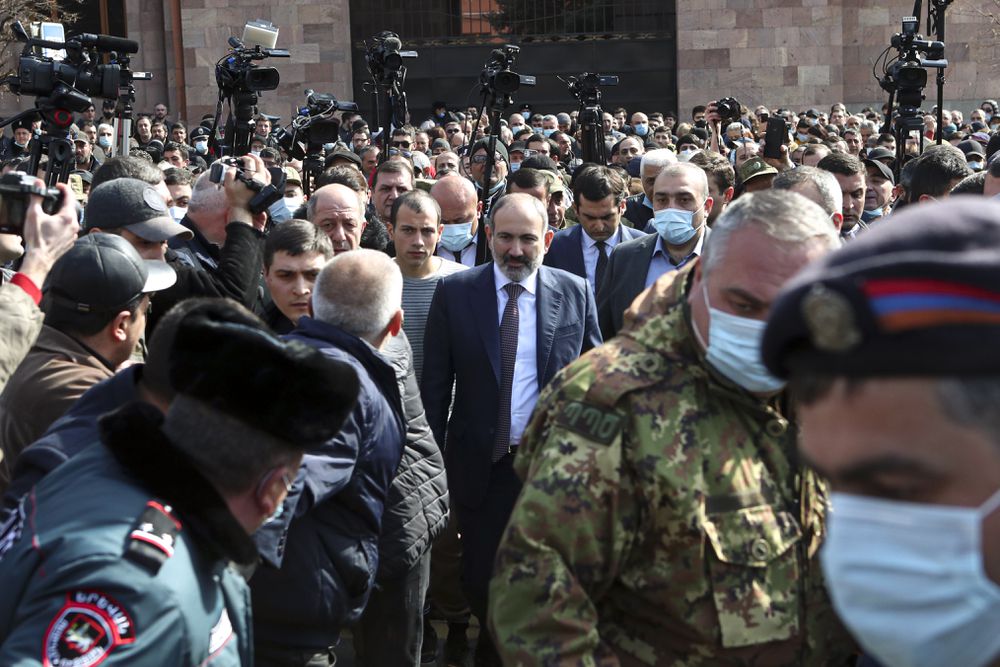 The Prime Minister of Armenia, Nikol Pashinyán, on Thursday ordered the dismissal of the Chief of the General Staff, Onik Gasparyán, who had headed a letter signed by more than 40 high military officials demanding the resignation of Pashinyán due to the defeat of Armenia in the conflict Nagorno Karabakh with Azerbaijan, which resulted in the death of some 6,000 soldiers and some 150 civilians. The prime minister has accused the military leadership of “trying to carry out a coup” over the letter and has called on his followers to back him. Pashinyán has faced major protests since last November it signed a peace agreement with Azerbaijan negotiated by Russia that involved the transfer of control of territories in the mountainous enclave. The new chapter in the Armenian crisis, a strategic point in the South Caucasus, has raised great concerns about stability in the region.

The opposition, however, remains firm and demands that the president remove power as the only way out of the situation of political tension. They accuse him of wanting to lead Armenia into a civil war. The situation in the country, in serious crisis since the Nagorno Karabakh conflict heated up again in September and its disadvantage against Azerbaijan, which has been supported by Turkey, is on the way to worsening. The Kremlin, which negotiated the peace accords and is an ally of the two countries, has been very concerned this Thursday about the situation in Armenia and has asked the parties to calm down. At the end of November, in a harsh intervention, Russian President Vladimir Putin, who played a very prominent role in signing the ceasefire pact, warned that breaking it would be “suicide” for Armenia, where it has a military base and strong ties. This Thursday, Putin spoke with Pashinyán and asked him to do everything possible to “preserve calm and order in Armenia,” as reported by the Kremlin.

In a demonstration in Yerevan, the capital, along with his son, several ministers and hundreds of supporters, Pashinyán defended his decision and in an impetuous speech he asked his followers not to decline in their defense of the Government. “I became prime minister not by my own will, but because the people so decided,” he claimed. “That people demand my resignation or they shoot me in the square,” added the prime minister, who assured that the situation is “explosive” and may have unforeseeable consequences. Pashinyán has defended the decision to order the dismissal of the head of the military leadership. “The Army is subordinate to the people and the prime minister,” he said, quoted by the Interfax agency. The prime minister urged the military to protect the borders and not fall for what he has seen as spurious provocations. “A military coup will not work. Everything will end peacefully, we will decide what to do together with the citizens ”, Pashinyán claimed during the march in Yerevan.

Opposition supporters have also taken to the streets in Yerevan in a massive parallel demonstration. With shouts of “Nikol Pashinyán, traitor” and “Nikol, resign”, they have blocked some streets around the center and erected barricades. Some have promised to stay in Liberty Square day and night until the prime minister resigns. They accuse him of carrying out a nefarious policy and mediation in the Nagorno-Karabakh war, in whose last escalation, which lasted 44 days and ended in a defeat for the Armenians in the enclave, it was considered part of Azerbaijan. A territory until recently controlled by Armenia and that has been in conflict since 1994.

The opposition Republican Party, led by former president and former prime minister Serzh Sargsyan, has charged hard against Pashinyán. “These defeatist authorities are deliberately trying to lead the country into civil war. They are ready to take those measures to stay in power, “he says in a statement. The prime minister defends the ceasefire agreement with Azerbaijan as a “painful move”, but a necessary one.

Pashinyán has had a confrontation in recent days with several members of the Army and also fired a few days ago the deputy chief of the military leadership, Tiran Jachatryan, who criticized and described as “frivolous” his words that only 10% of Iskander missiles Russian-made models used in the Nagorno Karabakh conflict exploded on impact. Jachatryan’s cessation has caused even more unrest and triggered the controversial letter. The country’s president, Armén Sarkissian, who has a rather ceremonial role, has yet to sign the dismissal of the head of the military leadership ordered by Pashinyán. This Thursday afternoon, the prime minister stressed that if the president does not sign the order, he will make the decision as a gesture that “he has joined the attempted coup.”