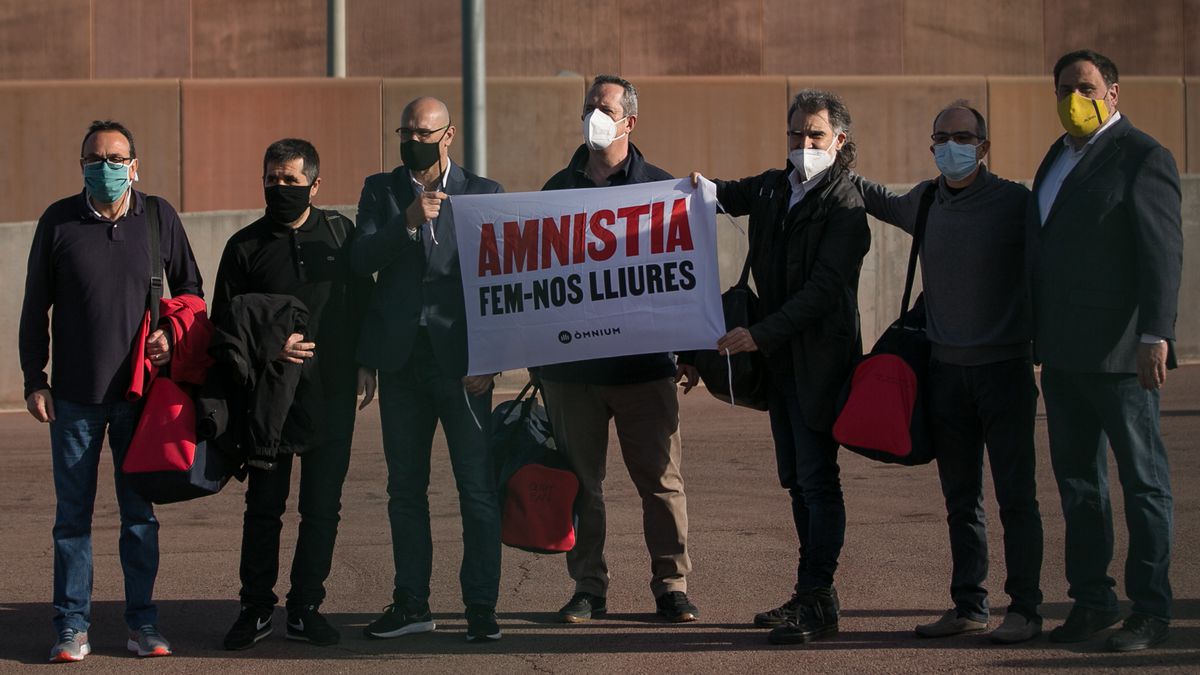 The visit of the lawyers to the Lledoners prison (Barcelona) last Thursday was different. The atmosphere, normally relaxed, was somewhat edgy. The seven male prisoners of the you process They were nervous, more restless the closer and real the granting of a pardon seemed that they formally reject, but that they intimately long for. The announcement that Pedro Sánchez would attend an event before representatives of Catalan society on Monday, at the Liceo, gave them the final clue: his departure was imminent after three and a half years in prison, a period that has been fraught with controversy for the alleged privileged treatment they have received behind bars, for their disputed prison classification and for an active political participation in electoral campaigns in Catalonia.

They have not been easy days or weeks for the nine independence leaders sentenced by the Supreme Court to prison terms. The possibility of the government’s pardon has haunted their lives. “We have always dealt with the issue with them with great prudence, especially for the families. On Thursday it seemed that everything was on track, and they were restless ”, explains Jordi Pina, lawyer for the former councilors Jordi Turull and Josep Rull and the former leader of the Catalan National Assembly (ANC) and general secretary of Junts per Catalunya Jordi Sànchez.

And yet they didn’t have all of them with them. “Watch, because in politics a thousand things can happen,” predicted one of the former councilors, distrustful until the end. His anxiety also came from the lack of knowledge about the type of pardon that the Council of Ministers was going to approve. The increasingly solid indications that their prison sentences would be commuted have led them to not wait any longer and to request exit permits for the Sant Joan festival, a celebration deeply rooted in Catalonia. Most will leave this Wednesday the 23rd or Thursday the 24th to enjoy hours or days of leave. Now, everything depends on how the bureaucratic procedures are digested – BOE, Supreme Court, surveillance judge, Generalitat – but it is very likely that, when the pardons become effective, the prisoners will be on the street. On Monday, the Minister of Justice, Lourdes Ciuró, visited the seven male prisoners in Lledoners to “accompany them” in the process. He also contacted the families of the incarcerated Carme Forcadell and Dolors Bassa.

Either during the permit, or when they complete it, the inmates will have to return at some point to sign the release and collect their personal belongings from a prison, Lledoners, which has been their home for more than three years. In October 2019, the Supreme Court issued the penalties for the you process: from 9 to 13 years in prison. Since then, both the prison treatment boards and the Generalitat have made decisions that have made the life of the independence leaders more flexible and that have irritated the Prosecutor’s Office and, ultimately, the Supreme Court.

First was the application of an article of the regulation (100.2) that allowed them daily outings to work, take care of relatives or collaborate with social entities. Among controversies over the excessive number of visits they received in jail and other alleged favorable treatment, which the Department of Justice has always denied, came the no less controversial third degrees. The Generalitat granted the semi-release with the firm opposition of the Prosecutor’s Office, which saw it premature and highlighted the lack of repentance. In December 2020, the Supreme Court overthrew that semi-freedom regime. But the tug of war was not over: two months later, the Government returned with the third grade, which allowed the prisoners to participate in the independence mobilization for the autonomous communities of the past 14-F: they left Lledoners on the first day of the campaign.

It is not clear if the prisoners, with different leave schedules and disparate strategies, will choose to leave Lledoners together: reaching freedom for a pardon is not to their liking. Jordi Cuixart is the one who has maintained a more belligerent line. As the leader of Òmnium, he is betting on amnesty even at the cost of his personal life: “The priority as a political prisoner is not getting out of jail,” he said. Although, married and father of two children, he also wants to get his life back; and admits that there are “two Cuixarts”, with opposite tendencies, according to prison sources.

“I don’t think he liked that photo too much. One thing is to get out of prison because European justice agrees with you and another is to do it for a pardon that you reject, ”explains Marina Roig, one of his lawyers. But time passes and weighs on the prisoners, and shapes their positions as much as the political ups and downs. Former Vice President Oriol Junqueras is an example. Days ago, in a letter, he claimed that pardons could “alleviate the conflict.” Two years ago, in an interview, he did not see it that way: the pardon, he said, “they can put it where it fits.”