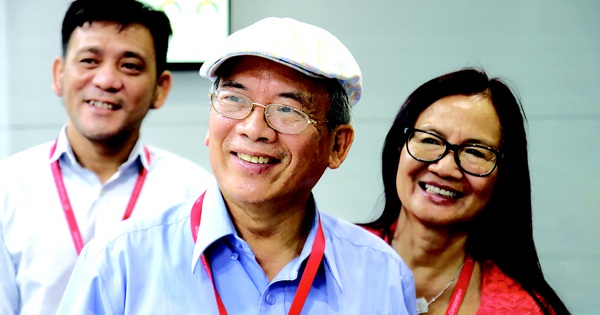 Enter Vietnamese name. Mr. Le recalled that in the early years of joining the market, in the thinking of foreign science and technology, Vietnam was just an agricultural country that just went through the war. Thanks to his previous personal connections (prior to TMA, he was the Vice President of Global Marketing at Nortel – a large technology corporation in Canada), TMA has signed several outsourcing contracts. simple. More “heavy” contracts came after that.

The year 2005 marked an important milestone when TMA successfully implemented major projects for Nortel, making TMA known in the world technology world. From 2010 onwards, major telecom brands such as Alcatel-Lucent, Avaya, Genband, NTT Data, Hitachi… became TMA’s customers respectively. “The view of the world towards Vietnamese technology enterprises has changed a lot. In the past, they considered themselves as workers, they can do whatever they want, but now they define themselves as a great partner, wanting to join them right from the start First, together prove the feasibility of a new idea Or in the past, they only delivered a part of the project, now it is in full package. It can be said that TMA has strongly shifted from outsourcing to investment depth for research and development (R&D) “- TMA President is proud.

Through business contracts, daily communication, decades ago, Mr. Le has actively promoted the image, wisdom and capabilities of Vietnamese people around the world. At home, his international experience, personal reputation as well as corporate reputation, his constant enthusiasm and dedication have inspired the Vietnamese software community to confidently compete on the playing field. large global.

Talking about the success of TMA, Mr. Le analyzed: TMA started as hired labor and apprenticeship, applying the knowledge learned in the process of hired work to develop into an innovative company with the core foundation of R&D. Therefore, TMA is not standing outside of any emerging technology trend in the world.

Invest in people. Talking about the plan to bring brainpower back to the Central region that TMA is pursuing, Mr. Nguyen Huu Le said 20 years ago, when he returned to Vietnam to start a business, he decided to invest in brainpower. Now, he still chooses to pour capital into brainpower because he does not invest in “better” places.

“Delicious” here is that investment in people will bring much greater value to society, relatively low investment capital, unlimited supply, and can make money. Twenty years ago, the technology industry was relatively new, with a lot of supply and demand, but now the opposite, supply could not meet demand. So in 2018, he chose the central land to “start a business” for the second time with the 15-hectare TMA Creative Park project in Quy Nhon City, Binh Dinh Province.

He hopes this project will open up opportunities for the people who live far away from their hometown to contribute to building and developing their homeland. In fact, a number of engineers have returned to join TMA Creative Park in Binh Dinh. “Here we have 120 engineers working. The goal is to have 250 engineers by the end of 2021, by the end of 2022 it will increase to 500 engineers” – Mr. Le optimistic.

Business is not just for money. Mr. Le affirmed that doing business not only has money, for money, but to think big and do big, to do something for life, to pay back the grace of life, to repay the great friends in life. “First of all, I want to be a grateful person. I am grateful to be born a Vietnamese, to return and do many things for the Vietnamese society and people after 33 years of traveling in the country” – Mr. Tam the.

Gratitude has always been the foundation to help him and his team keep TMA strong and strong. “Gratitude, kindness are our core values ​​that are always nurtured by us, expressed through the labor policy, recruiting and using talented people, creating a working environment, creating … With leaders. It is also the application of the word heart, the word ethic to all decisions, all relationships “- he shares more.

Because of this gratitude, 10 years ago, TMA established a Student Development Center that specializes in training specific techniques that are not taught at school or training “soft” skills. such as speaking style, special debate in English, teamwork skills instruction. The Center is cooperating with about 10 universities to provide practical training for students. The center is also responsible for filtering input personnel for TMA. Many students, after being trained at the center, have become part-time employees and then full-time employees, long-term staff.

“The Covid-19 translation is still complicated, the global economy cannot recover, TMA itself and its major partners have not been affected much, but we are also proactive in response plans. Still have to take care of the rice cookers of all employees and constantly innovate to rise “- Mr. Le said with certainty.

TMA started out as hiring and apprenticeship, applying these

knowledge learned during hiring to develop

The core foundation is R&D.

TMA was established in 1997 with only 6 members, main activity is in software development related services.

By 2020, TMA will have a total of 2,700 employees, of which 2,500 are engineers. In addition to the facilities in Ho Chi Minh City, the project in Binh Dinh (the hometown of Mr. Nguyen Huu Le), the company has representative offices in Canada, the US, Japan, Europe, Australia and Singapore.

Answering the question about the future direction of TMA, Mr. Le said that there are many projects in Binh Dinh Creative Park that the “harvest” time must be 15-20 years. “20 years is not too far for a person in the age of” old hybrids “? – I asked cautiously. building a successor team of 12 core staff, who can take care of the company’s operations instead. My wish is to live 30 more years, not only to witness the future of TMA but more importantly to celebrate the 100th birthday for my wife. She is Bui Ngoc Anh – the founder of TMA “- Mr. Le said with a funny expression, his eyes shining with a very young smile.