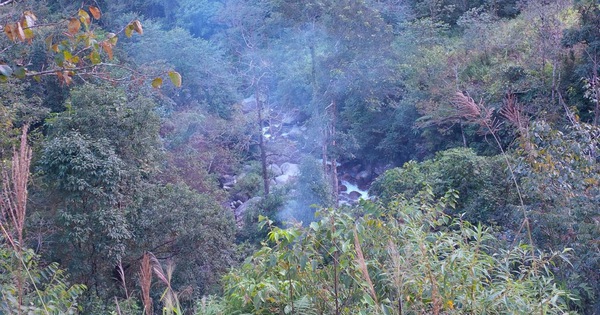 The road to the top of Pu Si Lung mountain is very arduous, extreme in weather and takes more than 10 hours to arrive – Photo: CTV

Exchange with Youth Online On the evening of May 2, Mr. Kieu Hai Nam, vice chairman of the People’s Committee of Muong Te district, said that in the area, a murderer died on the way to conquer Pu Si Lung peak in Pa Ve Su commune.

According to initial information, about 12 o’clock On April 30th, a group of travelers including 10 people, with permanent residence in many provinces and cities nationwide and 2 people led the way to register a temporary residence with the police of Pa Ve Su commune and report to Don Pa Ve Su border guard on schedule to conquer Mount Pu Si Lung.

“Around 6 am 2-5, we received information from our guide about a case of Mr. K. having an incident leading to death. According to information from the mountain climbing group, during the conquest of Pu Si Lung peak, it rains a lot. Mr. K. was soaked in the rain, and later showed signs of fatigue, colds and death.

Immediately after receiving the information, we directed the Pa Ve Su Border Guard Station, the authorities and forces of the commune, CMr. An in Muong Te district established a group of 20 people who departed at the place of the victim’s death “, said Mr. Nam.

According to Mr. Nam, the road from the commune center to the incident point is about 8-9 hours on foot. To kAround 16:30 this afternoon, the rescue team approached the scene and proceeded to bring Mr. K.’s body back.

“At 20:45, the team took Mr. K’s body back, still about 10km from the center of Pa Ve Su commune. It is expected that around 22:00 the group will return to the commune center, we have mobilized a medical vehicle to bring Mr. K.’s body to the district medical center. Currently, the border force has contacted Mr. K’s family to receive the body, “said Mr. Nam.

Mr. Nam also said that the district instructed the Division of Labor, War Invalids and Social Affairs to provide initial support to Mr. K’s family, At the same time, the police department was assigned to work with the group of people with Mr. K. to clarify the cause of the incident.

The top of Pu Si Lung is 3,083m above sea level, located in the border commune of Pa Ve Su. The road to the top of the mountain is very arduous, extreme in weather and takes more than 10 hours to arrive on foot. Recently this place has been discovered by many adventurous adventurers in the country.