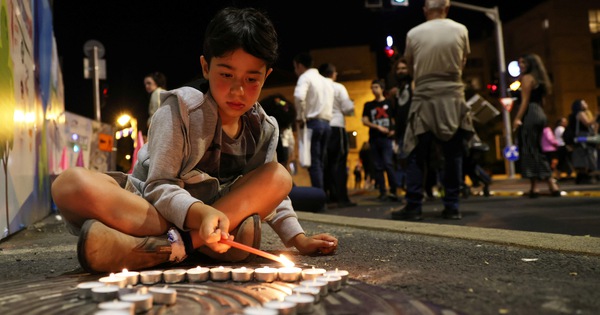 A boy lit a candle to commemorate the victim of a tragedy trampled on April 30 on Mount Meron, Jerusalem, Israel – Photo: REUTERS

According to Reuters, at least 45 people were killed and more than 100 injured after the tragedy on Mount Meron, Jerusalem, during the Lag BaOmer festival around the mausoleum of cleric Shimon Bar Yocha. The festival is held overnight from April 29 to April 30.

Up to now, the cause of the above tragedy has not been clarified. However, according to witnesses and some videos circulating online, some people stumbled on a small exit, causing a jam with hundreds of people pouring out. Crowded people have led to trampling.

One witness said he witnessed a tower of people stacked on top of each other. Local authorities confirmed that there were young children among the casualties.

Avigdor Hayut, a victim in the incident, lost his 13-year-old son. They were trapped in the flow of people that day, he said.

“I am standing on the floor. Just 20 seconds I took my hand off my baby, and now it’s gone. At that time I was almost paralyzed and could not see anything, ”Mr. Hayut told the press before leaving the hospital about his child’s funeral.

“My baby screamed ‘Daddy, I’m going to die…’. They dragged me out at the last minute, ”added Mr. Hayut.

Israel’s Health Ministry said 42 victims were identified by the end of May 1-5. This process was delayed for 24 hours because of the Sabbath of Judaism and continued on the afternoon of 1-5.

The Israeli rescue service said more than 2,000 Israelis had responded to the urgent blood donation call.

Representative of the US Embassy in Israel confirmed that “many US yards” were among the dead and injured. The agency is working to confirm that there are additional citizens involved, and provide necessary assistance to US citizens in distress.

American media have identified a number of ill-fated victims, including a 19-year-old citizen traveling in Israel.

US President Joe Biden and many other world leaders have sent their condolences to Israel.