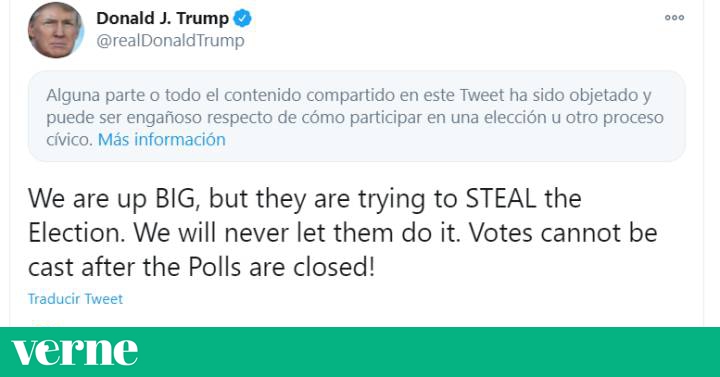 US President Donald Trump has tweeted at 2:30 a.m. Washington time (8:30 a.m. Spanish peninsular time), a message saying he had an advantage in the recount: “They are trying to STEAL the elections. We won’t let them do it. You can’t vote after the polls close! ” Twitter promptly flagged the tweet as potentially misleading. Trump published a second message advising that he would appear in the next few hours to announce “a great victory”. [Puedes seguir la última hora de las elecciones estadounidenses en EL PAÍS].

We are up BIG, but they are trying to STEAL the Election. We will never let them do it. Votes cannot be cast after the Polls are closed!

Trump’s message came after the public appearance of the Democratic candidate, Joe Biden. From Wilmington, Delaware, Biden was confident of winning the election, although the recount can take days: “It will take time to count the votes, but we will win in Pennsylvania. We have to be patient so that the recount ends. We continue in the fight in Georgia. We feel great about Wisconsin and Michigan. We think we’re on the road to victory. We’re going to win this. I’m keeping the faith. ” Biden insisted that the fight remained open until the final count, which can be extended in some states such as Georgia and Pennsylvania until Friday: “It is not my decision, nor Donald Trump’s to say who has won, it is a decision of the Americans. “. Obama’s vice president underscored this message on Twitter as well.

Keep the faith, guys. We will win this.

The social network itself explained on the platform that it had labeled Trump’s message for being “potentially misleading”, an action that is in line with recently announced regulations to avoid false information about the elections. The company posted that it would tag messages announcing a winner that did not come from official sources. Twitter thus expanded its rules on misleading messages that already included tagging or eliminating “misinformation that aims to undermine confidence in the elections in the United States.” according to a statement.

It is not the first tweet from Trump about the elections to receive this warning: it had already happened in recent days with two messages in which the president questioned the vote by mail. In one of them he described as “dangerous” the decision of the courts to allow in Pennsylvania the counting of votes that have arrived until three days after November 3 because it would lead to fraud and street violence.

Voting by mail can be decisive in these presidential elections, which remain tight and open several hours after the polls close. Early on Wednesday (Spanish time), several key states were still without a clear winner: Pennsylvania, Michigan and Wisconsin, among them.