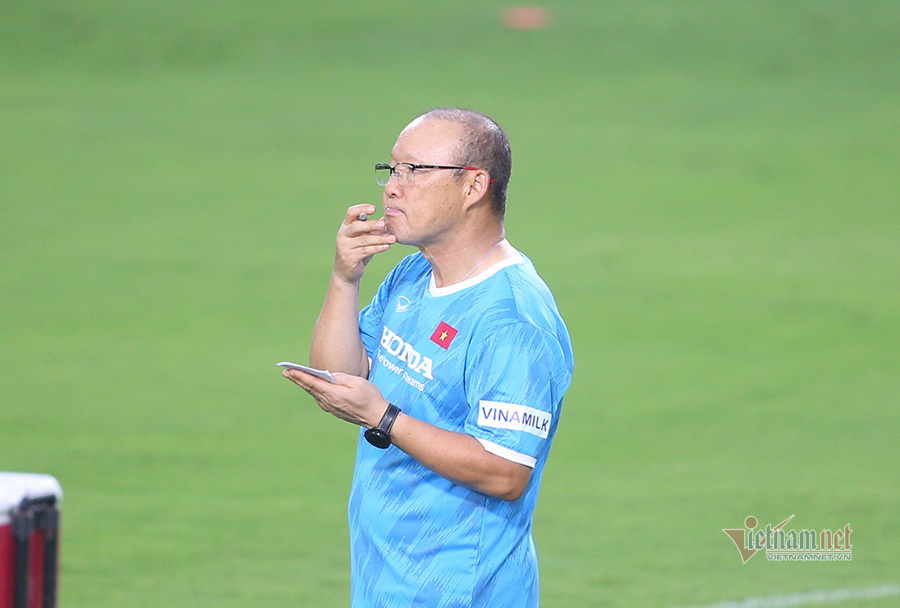 The Vietnamese team decided to get tickets for the final qualifying round of the 2022 World Cup in Asia, with Mr. Park taking the confrontation with Indonesia to calculate in the UAE, why not?

1. After more than a week of concentration, it was not until yesterday (May 18) that coach Park Hang Seo had enough troops when the group of players from SLNA finished their isolation to be present in the Vietnam team.

At the same time, the Vietnamese team defeated U22 Vietnam 3-1 in a friendly match to test their ability and performance with U22 Vietnamese juniors before leaving for the UAE.

This match for Coach Park Hang Seo is very important to check after 10 days what the players of both teams have learned, as well as take that to calculate for the next journey here.

However, like the friendly match at the end of 2020, it is very likely that the Vietnamese team will hardly receive many things when they are superior to the U22 juniors in terms of qualifications and experience…

2. Although considering the friendly match with U22 Vietnam as important, in fact the rehearsal that Mr. Park is aiming for is still in the confrontation with Jordan after marching to the UAE, in June.

This friendly match is the basis for the captain of the Vietnam team to evaluate, as well as make the final decision, who will compete in the battle for tickets to the third qualifying round of the 2022 World Cup with him.

But, it is difficult for both Jordan and Vietnam to play a game with all their might because both have to keep their feet while still facing the opportunity to continue. In other words, this is just a match for both sides to test their formation and tactics.

And in a less vital match, the benefit is certainly not too much, but it is better than the “white friendly” Vietnam team after nearly a month of concentration.

3. After the friendly match against Jordan, the Vietnamese team has a few days to prepare for the meeting with Indonesia. And surprisingly, this seems to be the match that Mr. Park took as a “test” for the home team.

There is reason to believe that this was only considered a draft for the Vietnamese team before entering the two vital matches with Malaysia and the UAE because Mr. Park lacked a lot of troops in the meeting with Indonesia.

Trong Hoang and Dinh Trong are definitely absent because of the penalty card, so Coach Park Hang Seo must find a replacement before the duo can return in the next matches.

Saying ‘maybe’ is because of risks such as injuries that are easy to happen, even considering Dinh Trong’s high performance, it is difficult to play, so whoever performs well in the match against Indonesia can continue to be used.

In addition to needing to find alternative factors, or option 2 for the remaining matches, it is also easier for Mr. Park to test the gameplay when Indonesia does not have too much motivation to play after being eliminated soon. .

Not to mention the fact that the Van Dao team lost to the Vietnamese team not less in terms of level for the Korean captain to be confident and leisurely before taking 3 points for himself, as well as creating opportunities for new factors. show or have just recovered from an injury.

In the past, many times Mr. Park used to take official matches to test the gameplay, now repeating is normal!

Tags: Coach Park Hang Seorecruiting Vietnam to the UAEVietnam IndonesiaVietnam teamVietnam team qualifying for World Cup 2022when will Vietnam recruit U22 Vietnam for a friendly?