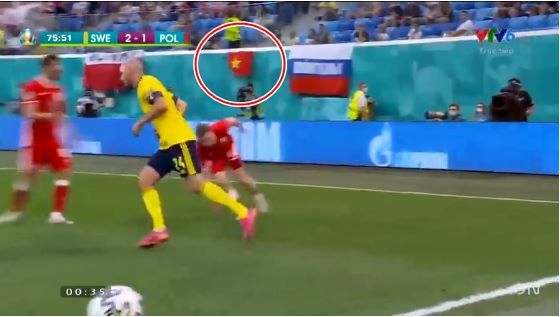 An interesting image for Vietnamese football fans when the red flag with a yellow star appeared on the stands of the EURO 2020.

The match between Sweden and Poland in the final round of Group E EURO 2020 was held at Gazprom Arena, in the city of Saint Petersburg (Russia).

Gazprom Arena has a capacity of 68134 people, but to ensure the prevention of the Covid-19 epidemic, the number of spectators allowed to enter the field at this time is 50% (equivalent to about 30000 people).

Among the fans who entered Gazprom Arena on the afternoon of June 23 (local time) to cheer for the two notable teams were Vietnamese spectators, with a red flag with a yellow star appearing in the stands.

Although this is the European football championship, the appearance of the Vietnamese national flag on the field brings an interesting and proud image to fans back home.

In this match, Sweden won a dramatic 3-2 victory over Poland to advance to the 1/8 round with the top of Group E. Lewandowski (scored both goals for Poland) and his teammates had to bid farewell. with Euro 2020.

The final round of matches of Groups E and F has already determined all 16 names that have passed the group stage, and 8 pairs of matches have also been named.