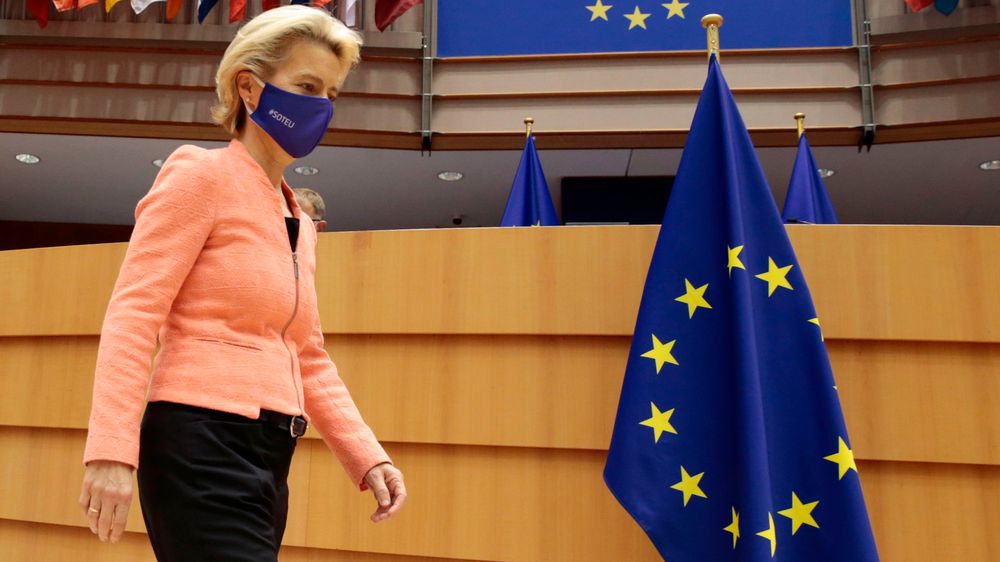 The president of the European Commission, Ursula von der Leyen, has chosen a sober tone for her first speech to the European Parliament on the state of the Union on Wednesday. And it has chosen to present its agenda for the next academic year as the exit from the “fragile” and “uncertain” environment in which the pandemic plunged the EU. The head of the Community Executive has decided to step on the accelerator towards an economy without fossil fuels and has raised the greenhouse gas reduction target to “at least” 55% by 2030 from 1990 levels. The German has also called on member countries on several occasions to rebuild “confidence” and close the most urgent crises: the health emergency, the economic collapse and the migration challenge.

Von der Leyen has come to the Chamber with the support of her entire cabinet, which gave her confidence by a very narrow margin and which scrutinized each of its commissioners, to the point of overthrowing three of their candidates. Not a hundred days of grace gave him the outbreak of covid-19, which caused the greatest health, social and economic crisis that the European project is going through. “The pandemic, and the uncertainty that accompanies it, is not over. And the recovery is still in a first phase, “he warned. The president of the Commission, however, wanted to make a virtue of necessity and point out the path that European citizens are looking for to “get out of this world of coronavirus”. It is not about, he said, just “repair” or “rebuild”, but to shape “something better.” “We are prepared for change and to move forward,” he announced.

The German has opted for a speech without epic, bombastic phrases or grand visions about the EU. His plans for a new stage are based on the two great catalysts of the Executive: the Green Deal and digitization. Von der Leyen has gone further and turned them into the engines of a “generational project” that must be based on the foundations of the community building: democracy, in whose “universal value” he said he believed, equality and the social economy of market.

The European Commission finally decided to opt for the highest range of the options it contemplated for reducing emissions in 2030 and go from the current 40% to “at least” 55%. The goal is “ambitious” but “achievable.” In other words, too much for some and little for others. Brussels also has in its hand a tool of the first magnitude to carry out its green agenda: a massive package of 1.8 trillion euros. The German, also sparing in major announcements, has stated that 30% of the debt issued by the European Commission to capture the 750,000 million euros of the recovery plan will be articulated through green bonds.

The achievement of these objectives will again require the agreement of the Twenty-seven, in particular of the Eastern countries. Von der Leyen has urged them to “restore confidence” after a period in which the European Commission has had to intervene to avoid blockades of goods at the borders or a ban on exporting medical supplies. The president has asked them to heal those wounds in the face of the proposal that she will formulate next week for a new migratory pact that leaves the Dublin convention behind. “Saving lives at sea is not optional. And those countries that comply with their legal and moral duties or those more exposed than others must be able to trust the solidarity of the entire EU “, he pointed out. Without further details, the president has advocated to guarantee solidarity between partners and ensure a stronger link between asylum and return.

The other major front on which the unity of the member countries will be required is the economic one. The EU has so far managed to give a unitary response through an immediate loan plan of 540,000 million and a fund of 750,000 million for the recovery. Von der Leyen has urged the capitals not to withdraw stimuli to the economy yet, to carry out structural reforms and to complete the Banking Union.

For now, the Twenty-Seven have exhibited unity in the Brexit negotiations. The president of the Community Executive has given this Wednesday almost for lost the possibility of sealing a new trade agreement with the United Kingdom after the decision of the Government of Boris Johnson to unilaterally break with some of the clauses of the Withdrawal Agreement with the EU. “It’s a matter of law, trust and good faith … Trust is the foundation of any strong partnership,” he said. And he headed to London with a quote from a 1975 speech by Margaret Thatcher to the Conservative Party: “Britain does not violate treaties. It would be bad for Britain, bad for relations with the rest of the world, and bad for any future trade deal.

Von der Leyen has also referred to the tensions in the eastern Mediterranean between Turkey, Greece and Cyprus over the exploration of energy resources in the area and has warned Ankara that, although it is a key partner in hosting refugees, that is not justifies “attempts to intimidate your neighbors.” He also had a message for those who advocate a rapprochement with Russia. Von der Leyen considered that the assassination attempt on Alexei Navalny is not an isolated incident. Moscow has acted outside its borders in the United Kingdom, Syria, Georgia or Ukraine. “This behavior is not changing, and no oil pipeline will,” he added.

The EU’s priority continues to be to mend the battered relations with Washington after the commercial disagreements between the two blocs. “Whatever happens this year, we are prepared to build a new transatlantic agenda and to strengthen our bilateral alliance, in trade, technology or taxes,” he said. More problems pose relations with China, which he again described as a partner and “systemic rival.”

The loudest applause in the chamber did not come until Von der Leyen spoke of the rule of law. The President of the Commission has promised to protect the EU Budget from any hint of fraud or corruption and has been intolerant of its violation. Without directly pointing to Poland, the chief executive has also shown against the government’s policy of supporting cities that proclaim themselves “LGTBI-free zones”, or what is the same, where the LGTBI community it is stigmatized. “These violations of the rule of law cannot be tolerated,” he said to applause from the Chamber. “Be yourself not your ideology. It is your identity ”, has riveted.

Von der Leyen has also been combative against racism or anti-Semitism, and has announced the creation of a new figure in its executive, an anti-racism coordinator. “In this Union, the fight against racism will never be an option,” he said. “Hate is hate,” he concluded.