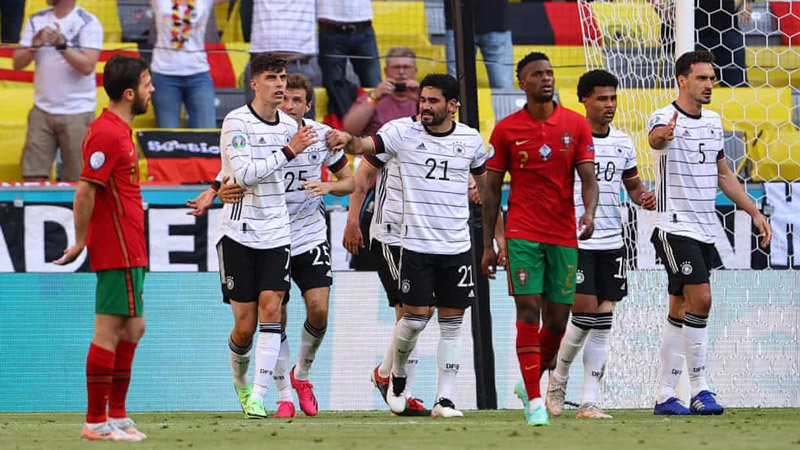 The German tank was praised a lot after defeating Portugal 4-2, the second round of Group F EURO 2020. What do insiders say?

Faced with pressure when he was empty-handed against France on the opening day, then scored early in the battle with Portugal but was not recognized. The next result, Ronaldo burned the net Neuer. Joachim Low’s team is viewed in a gloomy direction.

But Germany and Portugal have made the best match from the beginning of EURO 2020 so far with 6 goals scored, including 2 significant home goals from the guests.

With this result, Germany is ranked above Portugal despite having the same 3 points, so they have the right to decide their own fate with the last match to Budapest of Hungary, while Ronaldo and his teammates have to live with France (4 points).

Striker Thomas Muller expressed his joy after the match: “We allow ourselves to get a little excited. It’s fun to play in this atmosphere.

Now we have 3 points, in a good position and have the right to decide in our hands. We must not be too arrogant and become arrogant but we must believe in our qualities.”

And Gosens, even though it was only his 9th time playing for Germany, expressed that it will be a match he will keep in mind forever.

The player who created Kai Havertz scored and then scored to make it 4-1 for Germany, sharing:

“This win is basically important to the rest of the tournament. I don’t know what words to use to describe this moment. It will stay in my mind forever. It will be one of those evenings that I will never forget in my life.”.

Portugal set a sad record in a strong defeat to Germany

Ronaldo was the one to bring Portugal ahead, but coach Fernando Santos’ team was gradually overwhelmed by the German host, winning 4-2 in reverse.