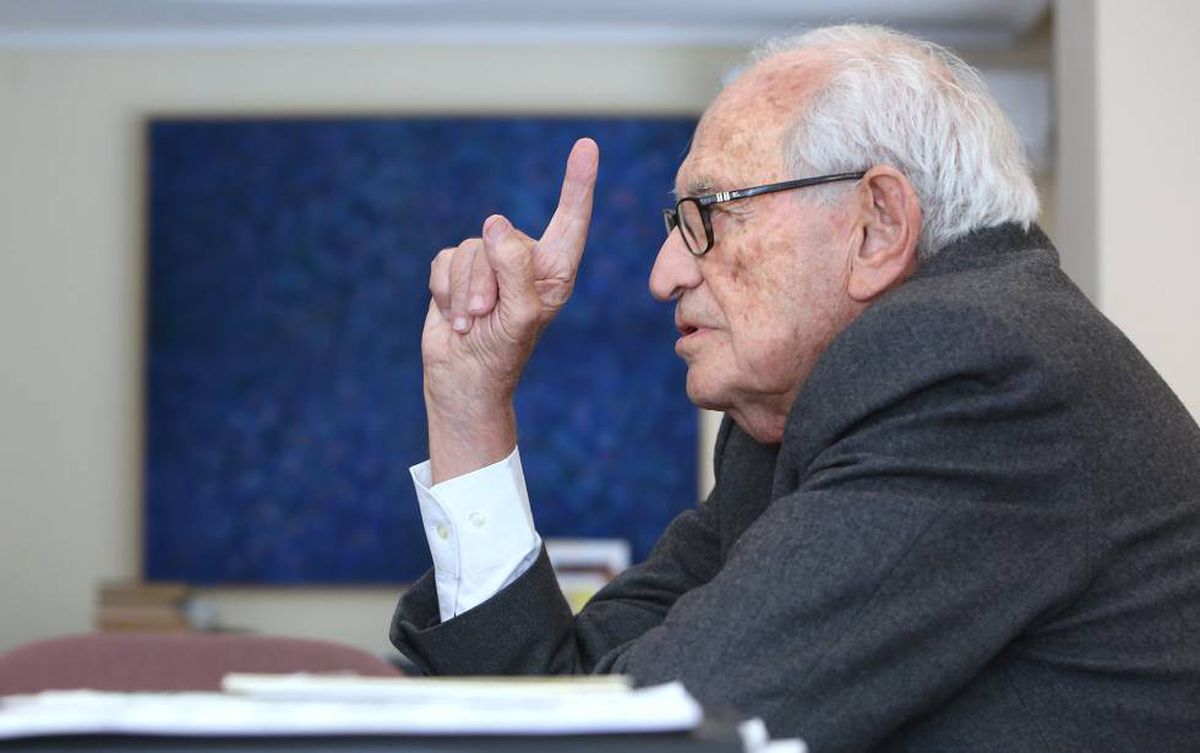 Just saw the light Of banks, bankers and supervisors (Deusto), a memoir in which the author, Aristobulus of Juan, he writes everything he has lived “straight from the trench.” The ninety-year-old author (Madrid, 1931) has been working in banking for nearly 60 years, as a manager for 15 years at the defunct Banco Popular and another 43 as an official at the Bank of Spain (BE), the World Bank (WB) and, since 1989 , as a consultant, always dedicated to saving the “sick bank”, first in Spain and later in a large part of the planet (he has worked for 32 countries on four continents, he lacks Oceania, but everything will work out).

Aristóbulo de Juan tells that he came to the bank by chance, that in his youth he wanted to be a doctor, then an anthropologist and, ultimately, a judge. However, although he studied law and majored in economics at the World Bank’s School of International Officials, a little of everything was unintentionally done in the financial system. And, probably also unintentionally, he became one of the most universal and unknown Spaniards outside the financial sphere, where he is well known.

These memories may be late for many. But De Juan is still at the foot of the canyon. In any case, it shows that it has “a very rich documentation and a remarkable memory” that it has “the moral obligation to disseminate”. The 230-page work offers an exceptional review of Spain’s financial history practically since the 1959 Stabilization Plan by someone who is enthusiastic about their work. Its reading is enjoyable, clear and even fun. And, above all, it supposes a great learning that allows us to understand many of the things that happened in the environment of the BE and also of the Popular.

The signing by Popular soon led him to place himself in the middle of two characters that have also been history in the Spanish bank: Luis Valls Y Rafael Termes, prominent members of Opus Dei, “two colossi with different visions” who had sometimes stormy and conflicting relationships before which he, who emphasizes that he does not belong to the Work, had to act as a hinge. On the one hand, to grease the relationship and, on the other, to give early warning of possible errors, while it meant “being the object of organizational marking” by Termes. “His grid did not fit a figure of chief of staff or alter ego, flexible in configuration and whose content he did not control and could even make him feel uncomfortable.” De Juan values ​​him as a “great expert in accounting, a good linguist and a great communicator; as a businessman, much discussed ”. Enough.

The fact is that it details a complex relationship: “For some, Termes became the first executive and Valls, the vice president, but in an ambiguous relationship. If this was really the case, that would explain the tensions that had to follow for many years, as Valls strongly disagreed with many of Termes’ policies and management style. Valls ended up imposing his law and personality ”. There are more episodes in which it reflects “the serious substantive discrepancies” between the two. The way of managing Termes, which according to De Juan wanted to cover everything, began to worry Valls, “who saw with alarm that the normal controls of the bank’s management, beyond the numerical and the paperwork, were loosening; the strategy began to go in the opposite direction to what he, who was a true leader, considered correct ”.

Ultimately, Valls, who had been elevated to president in 1972, found the opportunity to ditch Termes in the fall of 1977 when the Spanish Banking Association (AEB) was created and proposed him as president, filling him with praise from his colleagues, probably in those meals that the big seven celebrated and that functioned as a poster. Termes left his duties, but the struggle greatly wore down the managers involved, including him, who could have been his substitute, a position that fell into Jose Maria Lage.

De Juan also partially dismantles the portrait with which the Florentine Valls was reflected in the media. He describes him as ambiguous in his way of acting and as a fan of making “lateral arabesques”. It ended badly to the point that he left the bank as soon as he had an offer from the BE, where his reputation as a good analyst had already been consolidated. De Juan says that Valls snapped at him that Termes had told him that he was leaving because of him and that he confirmed it by adding: “In the entity, which has a divided dome, the climate is unbreathable; but if this is resolved and one day you need a CEO, I might consider it. ” “I’m not saying yes or no,” replied the sibylline Valls.

In the Popular, he learned about the banking context, which seemed “old and stagnant, both in its regulatory framework and in the tone and style of many procedures and the characters that inhabit it.” With these teachings, he arrived at the BE, where he became the main protagonist in the solution of the banking crisis of the late 1970s that swept over more than 50 banks and several savings banks. Among them the Cantabrian, Valladolid, Granada and the López Quesada Bank, in which his pulse did not tremble to defeat leaders very well related to the Franco regime. It was considered the black beast, who would then continue, as head of Inspection, with the interventions of Banca Catalana, the bank of Jordi Pujol, and Rumasa, in which he revealed the botched Jose Maria Ruiz-Mateos that the BE then passed to the Government for its intervention and he became a saint of the Jerez businessman’s devotion.

In the BE, he raised the basis of the problems that financial institutions were going to have to face with a logical sequence: to solve the most urgent and serious problems and develop a permanent inspection, including the seven big ones, some of which they were in a delicate situation, like Banesto, Central and Hispano, whose domes were modified. In fact, it had to act in the merger of Bankunión-Urquijo, controlled by Hispano, and discovered the hole in Banesto’s Garriga Nogués, defenestrating Javier de la Rosa, then representative of KIO in Spain for whom De Juan was about to work if the Banesto-Central merger had come out, in which the Kuwaiti group participated through Cartera Central and for which he was nominated as CEO.

From his time as a consultant, which began in 1989 when bank mergers were brewing, De Juan recounts his steps at the World Bank and at his consulting firm. He accumulated experiences and “when the crisis of 2007-2008 began in Spain, I was surprised by a series of official policies that seemed wrong, ineffective or expensive. Or all three at the same time. So I decided to go out into the mountains and start writing regularly, analyzing, criticizing and proposing alternative formulas, all of them based on my experience of many years ”, argues Aristobulo to add that he created enemies and a stream of followers, among inspectors, analysts and even bankers, some of whom, he points out, collect his writings.

Perhaps the best compliment to his career was the one that a veteran BE inspector gave him in a Christmas drink: “You have to see, Aristobulo, you do nothing but criticize us … but the bad thing is that you are right.” Or the one who told him Emilio Botín, son, when he was still the CEO of Banco Santander: “I don’t know what happens in this house, that any delicate subject always ends up at your table.” “As it should be,” he replied.