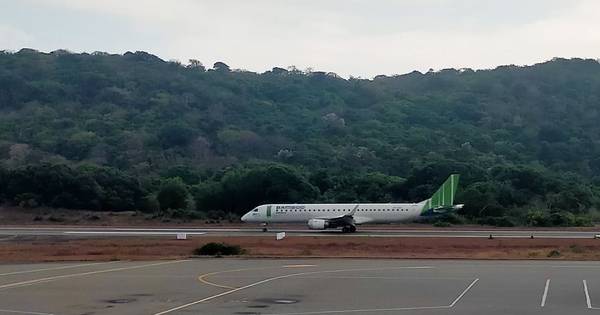 
The delegation of Bamboo Airways had a working session with the province Dien Bien to discuss the results of research and survey on the plan to open a flight route to Dien Bien, according to the Electronic Information Portal of Dien Bien province. Mr. Nguyen Ngoc Trong, Deputy General Director of Tre Viet Aviation Joint Stock Company (Bamboo Airways), said that there are still many difficulties and problems, mainly limited commercial load, due to local restrictions. pictures and infrastructure of Dien Bien airport for each route surveyed and exploited the Embraer 190 type.

Petrolimex Aviation Joint Stock Company also discussed the contents of the survey on investment in storage and flight fuel supply systems at Dien Bien airport, proposing the province to have a plan to arrange area for fuel storage. to serve.

Petrolimex Aviation Fuel Joint Stock Company soon researches and develops an investment plan to build a flight fuel supply system at Dien Bien airport. To meet the operational requirements of airlines in the coming time, especially after the project of renovation and upgrading of Dien Bien Airport is completed and put into use.

The Airport Authority in Dien Bien actively coordinated with other aviation agencies and agencies in the province to create favorable conditions for Bamboo Airways and Petrolimex Aviation Petroleum Joint Stock Company in the survey process. , investment and organization of aviation service supply activities and commercial exploitation of enterprises operating in the aviation sector in the coming time.

It is known that the Vietnam Flight Management Corporation (VATM) is designing a flight method that is expected to submit to the competent authority for approval the method in May 2021, scheduled for a test flight in June 2021. Bamboo Airways is actively updating and implementing the pilot training and training according to the new flight method, which is expected to start operating in August 2021.

Currently, flights to Dien Bien are operated by the Aviation Services Company VASCO (a member unit of Vietnam Airlines) with ATR72 aircraft.