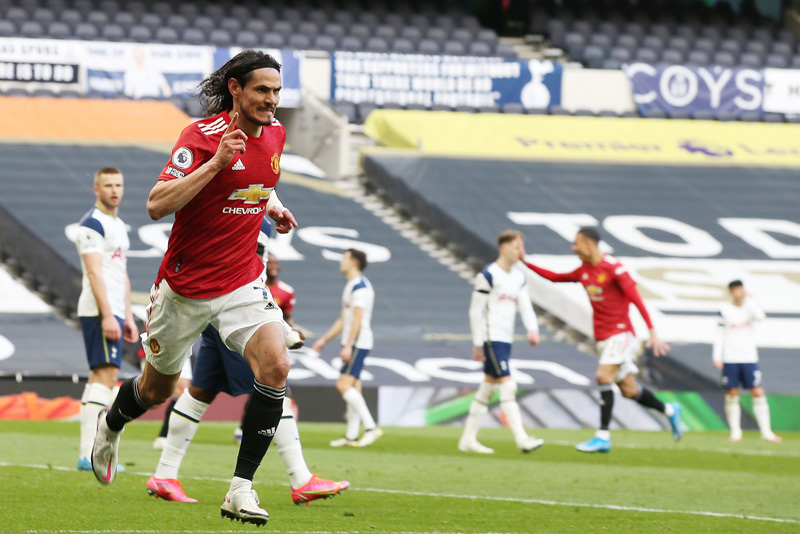 Being led, but MU broke out in the second half to win against Tottenham 3-1, with goals from Fred, Cavani and Greenwood.

Goals (1-3): Pogba handled very well in the middle and passed to Greenwood. After a swing to eliminate Reguilon, Mason Greenwood stretched with his right foot to set a 3-1 victory for MU.

After a messy situation in the MU penalty area, Cavani hit the ball and broke the bar. Heart-pounding ball with Red Devils fans.

Goals (1-2): Greenwood made a precise swirling cross for Cavani to fly, head-to-head class against Tottenham.

Just on the field to replace Rashford, Greenwood made a sinking shot with his left foot, but the ball went to the back of the net.

Harry Kane has a smart handling, but the last kick in the narrow corner does not beat Henderson.

Bruno Fernandes entered the penalty area and created for Pogba. However, the jerking of the French midfielder’s heel was stopped by Eric Dier.

MU responded quickly. Bruno Fernandes cannonballed his left foot from a distance of more than 20 meters, but Lloris launched an excellent save.

Son Heung-min has a chance in the penalty area, but the left-footed shot does not beat Dean Henderson.

Wan-Bissaka bait the ball for McTominay to fire long-range, but Lloris saved Tottenham.

Pogba stretched across the right wing for Cavani to cut his face, but the ball went out.

MU arranged an impressive counterattack, but Rashford hesitated, so the opportunity passed.

In the last minutes of the first half, MU put up and created considerable pressure. Bruno Fernandes passed to Cavani, but the Argentine striker could not hit the ball.

Goals (1-0): Tottenham had a middle beat, Lindelof broke the ball for Lucas Moura to help clear Son Heung-min to open the score.

Pogba “threaded the needle” for Cavani to sneak down to hit Lloris’s left foot. However, after consulting the VAR, the referee did not recognize the goal because McTominay had previously fouled Son.

Tottenham is in better control of the ball, but cannot find a way into Henderson’s goal when MU actively plays defense.

MU arranged an impressive attack. Cavani pushed the ball down for Rashford to hit a tense shot, but Eric Dier broke it.

Tottenham deployed an impressive attack. The ball was pushed to Lucas Moura on the right flank but the last shot was blocked by Luke Shaw.

Tottenham: Doherty and Ben Davies are absent due to injury. Aurier and Son will return to the starting lineup.

MU: Martial is absent due to injury. Eric Bailly sidelined because of a suspended sentence.