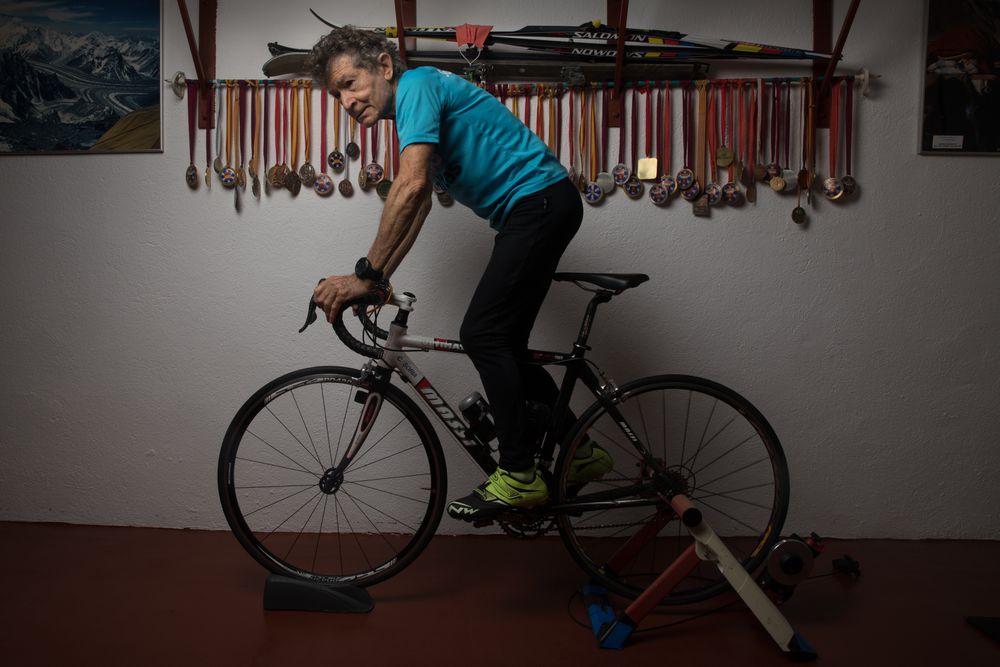 A superman lives in Moralzarzal. Carlos Soria lives in the mountains of Madrid, sheltered by the Peñalara and La Maliciosa peaks. He would pass through a normal 81-year-old grandfather who in retirement, after a life of sacrifice, enjoys the company of his wife, Cristina, his four daughters and four grandchildren. But something has made him special since he wakes up at 6:30 in the morning, and it’s not the breakfast of soy milk, oatmeal, and chia seeds, or the black garlic that he discovered recently. At seven o’clock he enters the small garage at home. The car is out. About 50 medals hang on a wall, most of them cross-country skiing. In another, climbing grips. On the floor are a mat and dumbbells. High mountain boots are stacked on a shelf. Next to it, a hypobaric chamber that simulates being up to 5,000 meters above sea level. There are three bikes, two hanging and another on a roller, with cranks with holes closer to the axis, a trick of a friend of the turner so that his left knee does not hurt, which does not flex well because of the prosthesis. Carlos Soria gets on, anchors the coves and starts pedaling while the town sleeps.

But who is this man? He says that he was born a mountaineer on February 5, 1939 in Ávila, but that life made him an upholsterer. “I have lived much worse than now,” he remembers when he got off his bike. “I started working at 11 years old. He lived in a house without water and with a toilet for three families. We were poor, workers. I have eaten a lot of porridge ”. It was not until maturity when he could turn to what has been his passion since adolescence: the mountains. Soria began to accumulate eight thousand at the age when most climbers have burned their careers and even their lives. Ten of the 14 roofs of the planet have been conquered when they are 60 years old. At eight he holds the record for being the oldest person on the summit. Everest climbed it at age 62, K2 at 65, Makalu at 69 (“of which I am most proud, my highest peak without artificial oxygen”), with 77 Annapurna …

He has two left to cross out and become the oldest with the complete collection: the Dhaulagiri (8,167m) and the Shisha Pangma (8,013m, he has climbed to the central summit but not the main one). “And that’s what I train for, to return to the Himalayas next spring,” explains Soria. “It is true that it is not one of my best moments, due to a problem with the peripheral nervous system. I have a strong torso and quads but weaker hands and feet. And they recently operated on my bladder because they thought I had something wrong. “

The pandemic has taken Soria a year away. Confinement caught him days before his expedition to Dhaulagiri. Everything collapsed. And although in Moralzarzal he has never felt locked up (“it’s not as if he had caught me in a small apartment with the four girls”), and he trains at Cerro del Telégrafo and La Pedriza, or escapes to Aneto and Sierra Nevada, the eight thousand come back in their dreams. Above all one.

Dhaulagiri. Up to 10 times he has stepped on its snow but never the top. “I want to go up especially to that one. I want him to give me time, and next year I’ll be 82, which is not silly. I don’t believe how old I am. That mountain and I have become very good friends and I think he will let me climb it. There my friend Pepe Garcés died and there I left the ashes of two others. And I would like now, since I am a grandfather, to go up and pay tribute to the grandparents who have died in this tragedy, bring flowers to the summit or something similar for this generation. I want to show that the elderly are here and we are not lost. We have not disappeared. I am alive and I fight every day. I want to dedicate that mountain so emblematic for me to all of them ”.

The Sanitas sports team has just signed him. Soria is looking for resources for an expedition that if it goes the way it would like, with several Sherpas and a camera, will cost about 140,000 euros. “I’m going to go anyway, though,” he says. And he goes back to training.