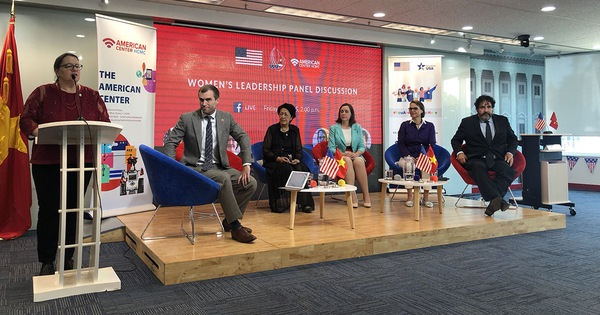 “Every man needs to be a good father, spend time playing and taking care of children, taking care leave, not just the one who brings money home. When the husband shares the housework, takes care of the children, the woman will have a better chance with the job.

One of the statements repeated many times during the discussion was: “Behind the successful man, there is always a strong woman”. Why is that?

Mrs. Josefine Wallat, German consul general, said that the woman had stepped back so that her husband had space and energy to do social work. In many cases, these women take care of children, manage family affairs, and are behind the scenes for their husbands to focus on their career.

Assuming women have this support, surely they will also do well and succeed with their career choices, because as Ms. Ton Nu Thi Ninh shares: today women do not need to prove they have. ability, because the capacity of women is without a doubt.

Mrs. Josefine shared that she was lucky because she had a husband to help take care of the children, so that she could focus on her work. She considers that help extremely valuable because she understands that changing traditional roles between men and women is always very difficult.

In the diplomatic profession, the senior positions must move to another country every 3-4 years. This makes it even more difficult for the diplomat’s spouse to always find a new start in a new country.

Australian Consul General Julianne Cowley said that while working in Ho Chi Minh City, she and her husband shared 50% of the housework as well as taking care of 3 young children and they rotate in many cases. Because of this mutual support, she can work as a consul general and her husband can still study for a doctorate. According to Ms. Julianne, when men are ready to redefine their roles in the family, the jobs and values ​​they bring are enormous.

The world has made great strides in gender equality. In the US diplomatic missions, for example, at the beginning of a career, the ratio of men and women is usually in balance. However, what worries the US Consul General in Ho Chi Minh City Marie Damour is that over time, with senior positions in the diplomatic service, due to the requirement to work abroad, many women have decided to give up. career.

Marie says we need to question what, institutional or cultural, has made choosing a career more difficult for women over time and solving it.

Change too much but not enough

The German Consul-General shared his experience of ensuring gender balance among decision-making groups in Germany to avoid biases that we do not know for ourselves. For example, when interviewing for recruitment, women tend to choose female candidates and men also tend to choose male candidates. Therefore, decision-making groups need a substantial balance of male and female representatives.

Ms. Josefine also said that strong socio-cultural changes promote gender equality. For example, evaluating workers based on performance will create conditions for workers, including women to be better evaluated.

US Consul General Marie also agreed with this. She confirmed that in terms of social culture, there are still many barriers to women such as judging them by the short length of the outfit or traditional role. The image of girls, women doing it all (housework) and boys and men not helping are still worryingly widespread.

According to the guests, these old conceptions are difficult to change, but once they do, it is sustainable change.

Ms. Ton Nu Thi Ninh agrees with this statement and said it is also true for Vietnamese women – who suffer more inequality in gender equality and come from the negative bar compared to men.

Ms. Ninh said that to change the situation of this negative starting point, three conditions are required. First, women need determination and ambition to succeed. Second, men need to encourage and welcome capable women to enter all fields and occupations. Finally, the policy of creating favorable conditions for women; For example, in recruitment, if there are 2 male and female candidates who meet the same criteria, the priority is to choose the woman because of the history of gender inequality they have to go through.

The Dutch Consul General, Mr. Carel Richter, said that what Ms. Ninh raised was done in his office, where women make up the majority with 90%.

“I can’t do diplomacy for being a woman “

In 1929, there was a young, intelligent college student on Rhode Island (USA) who was very interested in learning about international relations and politics. She dreams of becoming a diplomat. One day, an ambassador came to the school to give a speech. As a typical student, she was assigned the task of taking him on a tour of the school.

The female student shared with the ambassador about her dream of becoming a diplomat, but to her surprise, he shook his head: “I can’t be a diplomat. I’m a woman, let’s find another job.”

“That female student could not fulfill her dream and it was my grandmother. She inspired me to become a professional officer in the US foreign service in 1993” – US Consul General Marie Damour shared my life story.