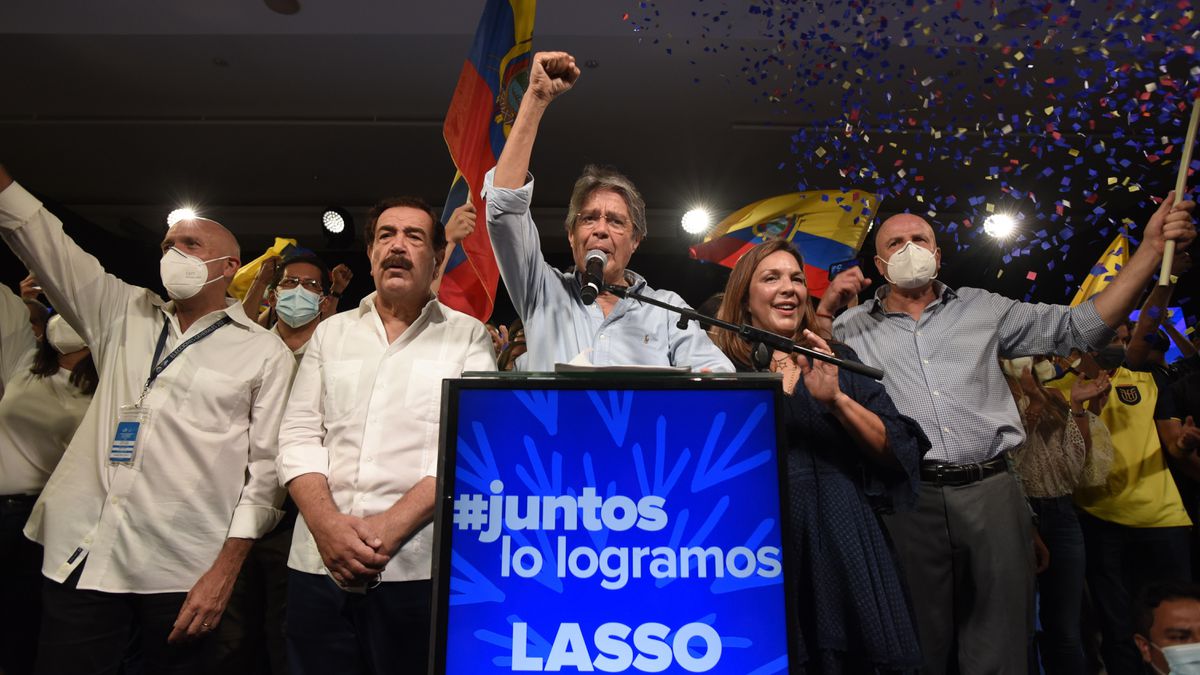 Guillermo Lasso has destroyed all the forecasts of the polls in Ecuador. When all gave a head-to-head final against the correista Andrés Arauz, the conservative leader has won the second electoral round by five points of difference. With 98.4% of the polls scrutinized, Lasso got 52.5% of the votes, against 47.5% for Arauz, the man chosen by Rafael Correa to lead the return of his “citizen’s revolution” to the Andean country. The result has been a severe blow to the former president, who has followed the campaign from Belgium, the country where his wife is from. Prevented from returning to Ecuador by a bribery conviction, Correa had gambled everything on Arauz, without success. Lasso’s triumph has also had a huge regional impact, because it slows the turn to the left that South America had started with Alberto Fernández in Argentina and Luis Arce in Bolivia.

“On May 24, we will take on the challenge of changing Ecuador with responsibility,” said Lasso, when the difference he had on Arauz had become irreversible. The president-elect has given a speech full of religious connotations, calls for reconciliation and clear limits to the increasingly powerful claim of feminist groups. God was an omnipresent figure on the night of the president-elect: “I thank God for all the blessings he has given me during my life; “I ask God to give us patience and certainty to achieve happiness for Ecuadorians”; “May God bless Ecuador.” Lasso also made it clear that there will be no abortion under any circumstances in Ecuador. “I speak to young pregnant women. With my wife we ​​will protect them, so that they continue in their schools, so that they can continue in the university, ”he said.

This Sunday’s election defined in favor of Lasso the correísmo-anticorreísmo dispute that structured the entire electoral campaign. The president-elect, with the permissions that victory gives, lowered the tone of the confrontation from the stage, but played with the reputation of authoritarian that accompanies his political rival. Without mentioning Correa, he called on Ecuadorians not to be afraid to “disagree with the president.” “Let them express their opinions freely,” he said, and immediately extended a hand to the opposition. “I did not enter politics to enrich myself or to persecute anyone,” he said, in a clear reference to Correa’s jail sentence.

Election day in Ecuador, in pictures

As Lasso spoke, Arauz accepted defeat from a hotel located in the center of Quito. Winner and loser did not hear each other – they appeared on television at the same time – but Arauz seemed to respond to the president-elect’s promises. “It is easy to think that the division is only generated by the other, but it is time for democracy, to end political persecution. Mr. Lasso, I invite you to respect the rule of law, without having different values ​​and principles becoming a stigma, we do not want Ecuadorians to continue to be imprisoned for their way of thinking, “he said. Correa, although absent, was present on the election night.

Lasso added almost 2.6 million votes to his harvest from the first round on Sunday. Arauz, barely a million. Correa’s miscalculation has been enormous. Her ancestry over the electorate was not enough to transfer votes to a 36-year-old candidate who was almost unknown when the campaign began. Inspired by the return of Kirchnerism in Argentina or the triumph of Luis Arce in Bolivia, which resulted in the return of former President Evo Morales from exile in Buenos Aires, Correa thought that a triumph was possible to accompany the leftist wave in the Southern Cone American. But Ecuador is not Argentina, where the organizing factor is Peronism, and neither is Bolivia. The MAS, the party of Arce and Morales, hegemonizes the entire progressive arch in their country; Correa has at home whoever opposes him from the left.

Key to Arauz’s defeat was the vote of those disenchanted with politics, who in the first round went to the Pachakutik indigenous party, led by Yaku Pérez, and to Xavier Hervas, from the Democratic Left. Pachakutik obtained 1.8 million votes in the first round, just 30,000 less than Lasso, and his candidates for the Assembly won in 13 of the 24 provinces of the country.

Indigenismo is today the second parliamentary force in Ecuador, with 27 seats, compared to 49 for Correísmo, 18 for Hervas and 12 that Lasso will have. That the indigenous vote has mostly preferred Lasso, a candidate far removed by definition from his ideals of change, rather than Arauz should concern Correísmo. Indigenism, which does not divide politics into right and left, is ready to be a third way that dispenses with Rafael Correa. Lasso, meanwhile, will have to deal as president with an emerging force that will hold the key to governance from the Assembly.

Subscribe here to newsletter from EL PAÍS América and receive all the informative keys of the current situation of the region.