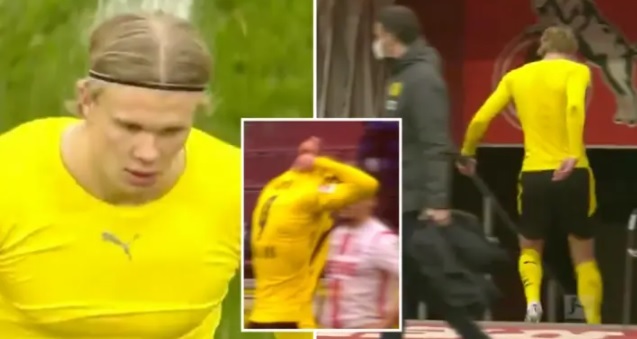 Erling Haaland was gloomy, throwing the Dortmund jersey to the opponent because he was disappointed with the home team’s 2-2 draw, Bundesliga round 26.

Playing on the guest book FC Koln, Haaland continued to shine, saving Borussia Dortmund from defeat by opening the scoring and equalizing 2-2 in the final seconds of the match.

Despite avoiding empty-handed scenes, the result means that Dortmund’s goal of winning tickets to the Champions League next season is even more difficult.

Perhaps this pisses off Haaland, when he plays, stands out (33 goals after 31 games this season) but still does not pay off with the overall results of the team.

As a result, the 20-year-old star is being hunted by the whole of Europe, having acted less fair-play after the game, surprising fans. Erling Haaland threw the Dortmund shirt at the FC Kohn player and went straight into the tunnel, instead of lingering on to change shirt.

In the midst of sensitivity, there are constantly rumors of leaving Dortmund, with concern from Real Madrid, MU, Man City, Chelsea, … Haaland has spoken out to soften public opinion through her personal page, with the expression:

“Not a great result. We will use that as the impetus to come back stronger. Thank you to all Borussia Dortmund fans for always supporting. We will be back soon ”.

Whether Dortmund can keep Haaland for at least one more season or not is revealed depends on whether the team wins tickets to the Champions League next season or not.