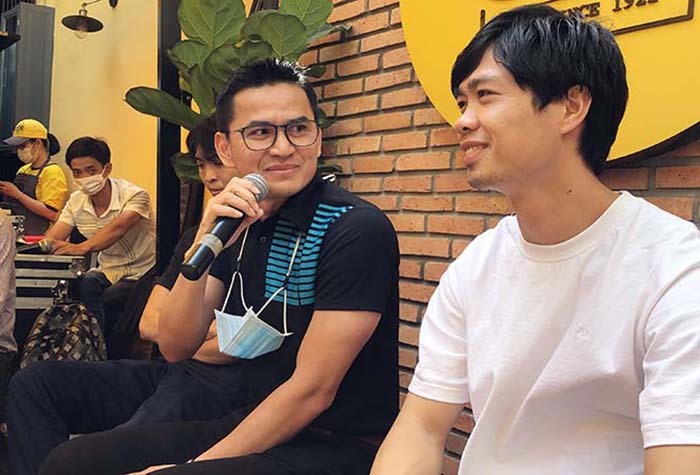 HAGL entered the new season with doping dose from ‘Zico Thai’ as well as the return of Cong Phuong after a time of ‘far away’ from team-mates Tuan Anh, Xuan Truong …

Look at the HCMC club …

After the initial excitement with the contract with Lee Nguyen or coach Mano Polking until now, fans of the Ho Chi Minh club are quite confused with the home team.

It is difficult not to panic when the team that is considered to be the second most expensive V-League last season (and even this season) is having a relatively boring prelude, especially after losing to rookie Binh Dinh in the tournament. friendly at home recently.

Of course, it is understandable that Cong Phuong’s old team did not play well when kicking in a friendly tournament with the aim of testing both in terms of personnel and gameplay, but losing money is still a bleak, but it is difficult to be different.

With a very short time budget since coach Mano Polking took on the role of coaching the Ho Chi Minh City club, there has not been any significant change in expertise, except that the Brazilian teacher carries a lot of modern equipment. for work.

Whether the “red warship” will change in the near future is still pending, but at least after the first debut as a new coach Mano Polking certainly has a lot of work to do with the HCMC club.

… worry about Kiatisuk but believe in luck and promise

At the same time Cong Phuong’s HAGL with the return of Kiatisuk in a new position – captain, was also competing in Binh Duong in the framework of the 2nd Thien Long Tournament.

And like the Ho Chi Minh City club, the Nui Street team with the goal of testing personnel, in matches without Xuan Truong, Cong Phuong, Tuan Anh and coach Kiatisuk … had to receive 2 consecutive defeats against Binh Duong. , Danang.

The results of the matches or friendlies are of course not so important, but HAGL’s tests over defeats have fans wondering about the future of this team.

The rookie players have not proven themselves, so next season the burden of HAGL will put on the shoulders of the former Xuan Truong, Tuan Anh and especially Cong Phuong in the field and Kiatisuk on the training bench, making it impossible not to worry. .

Worry is that next year the main team of players of the Mountain Street team will have to put more strain on the Vietnamese team with a dense schedule as well as continue to “fight” in the V-League in a relatively fierce manner. The season is over.

Not only the world, professionals also have to worry about Kiatisuk because from here to V-League 2021 there is still too little time for the former Thai player to change the situation at HAGL, like his colleague at Ho Chi Minh City club Mano. Polking.

It is important to know that Kiatisuk only has more than 10 days to arrange personnel and playstyle for HAGL before entering the 2021 V-League, while the home team has too much backlog from many previous seasons to solve.

During the meeting with HAGL fans in Ho Chi Minh City, the new captain Kiatisak asked Cong Phuong and Tuan Anh directly, can the club be crowned V-League? Both of them expressed their determination and promise to work with the new teacher and his teammates for that.