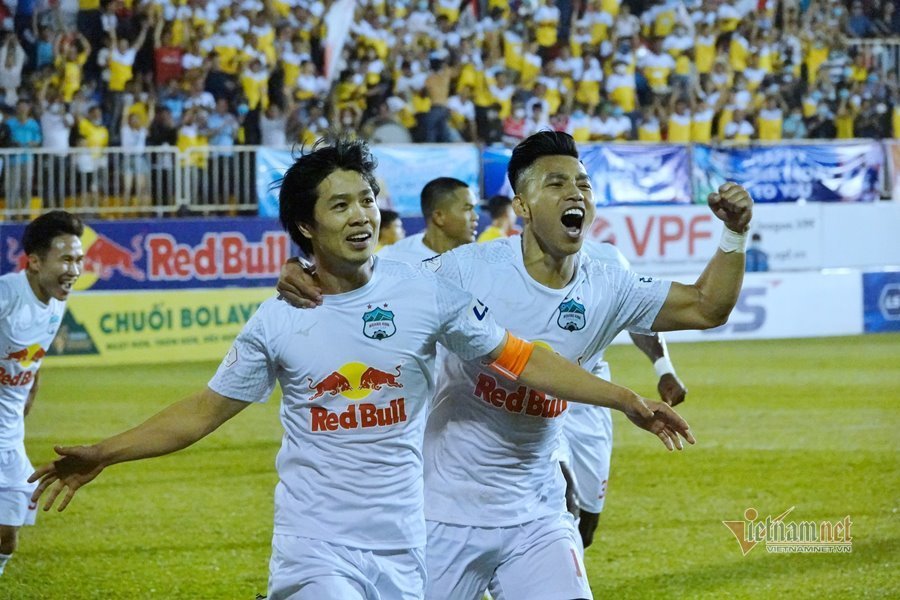 Cong Phuong is helping HAGL fly high and becoming the biggest candidate for the LS V-League 2021 championship. But coach Kiatisuk’s pet game can also be a barrier that makes the home team easily disillusioned.

1. After 9 rounds, Cong Phuong and Van Toan are the best players in the mountain city team, helping HAGL to fly high and becoming the number one candidate for the championship this season.

Not scoring as many goals as teammate Van Toan, but CP10 is considered excellent, more important in the calculations of coach Kiatisuk.

In the 5 goals that Cong Phuong has, most of them create a turning point for the match, or bring 3 points for HAGL.

2. A few days after the 9th round of the match, the VFF Disciplinary Committee announced a series of severe disciplinary sentences for violent acts, lack of fair-play in the V-League 2021.

Not surprising with the penalties for Thanh Thang, Thanh Thao … but quite surprised when Cong Phuong was accidentally forgotten by the Disciplinary Committee with a small swing of his hand at Xuan Tan in the HAGL’s victory over Nam. Dinh.

The situation that happened in the 69th minute with the spark of Cong Phuong created chaos on the Pleiku field, it took a few minutes for referee Tran Dinh Thinh to recover the hot heads from both sides.

CP10 itself was also retaliated by the Nam Dinh players with a fairly serious foul situation, after causing the opponent to hurt before. And yet, in the match against the Southern football team, Cong Phuong also reacted very strongly to the decisions of referee Tran Dinh Thinh many times.

3. This is not the first time Cong Phuong has escaped a disciplinary sentence from the VFF, just like last season, the Nghe striker at that time wearing the Ho Chi Minh club’s shirt used to have an offensive behavior with the flight to kick straight at a Binh player. Ocean.

Or before that, CP10 also had a rush to attack the senior goalkeeper Tuan Manh in the match against Khanh Hoa in the 2018 season, but all were ignored by the referee, then Cong Phuong himself had to admit the lack of his restraint.

Looking at Cong Phuong’s way of playing recently, it is clear that the determination comes from the striker of Nghe. It is the spirit, along with the rapid growth of expertise, CP10 is showing fans a very different image of themselves in a positive direction.

But also because playing football with such an excessively “blood fire”, many people are worried about HAGL if unfortunately the top striker of the Mountain Street team faces a suspension for errors as revealed.

Many people expect CP10 to always sublimate and score regularly as in past matches, especially keeping the cold as the way HAGL striker stood before the 11m penalty at the end of the match with Nam Dinh.

Because only that can ensure the stability of the Nui Street team in the race to the championship, otherwise it is very stressful when everyone sees how important and good this season the CP10 is at HAGL.