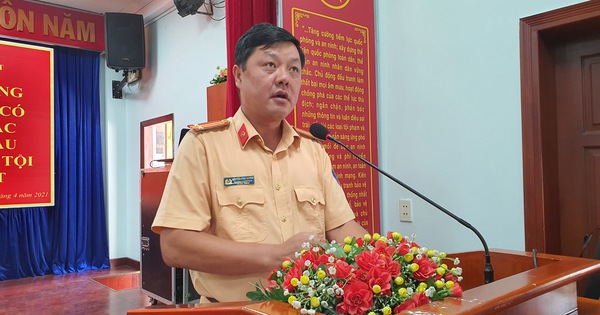 The examples of good people and good deeds of the teams / stations under PC08 received rewards – Photo: MINH HOA

In which recently, Captain Tran Xuan Sang – officer of the Da Phuoc Traffic Police Station – is a person Driving a special motorbike to pave the way for cars to transport critical patients to the Cho Ray Hospital in time on March 29.

Besides that, the soldiers 2 thematic groups of the Saigon South Traffic Police Team coordinated and captured 2 subjects, 2 cars and exhibits of 1,800 tobacco plants no invoices and vouchers on January 13. At that time, the one holding lThe love for cars carrying smuggled cigarettes has “frantically” rammed continuously into the police cars to escape, but with determination to prevent crime, the soldiers have suppressed the crime.

Video of a 7-seater car carrying smuggled cigarettes not obeying the order, crashing the traffic police of the South Saigon team at night 13-1

Next came the case of Binh Trieu Traffic Police Team established achievements in fighting, preventing the spread of the COVID-19 epidemic when secretly coordinating with functional forces in detecting and stopping cars carrying 5 Chinese people illegally entering Vietnam on Highway 1, the section passing through Thu Duc City on December 28, 2020.

Another case is tCaptain Nguyen Minh Hai, officer of Tan Tuc Traffic Police Station, discovered and captured 2 criminals who committed robbery of property running from Ben Tre province to Ho Chi Minh City and assigned them to the police to handle.

Speaking at the ceremony, Senior Lieutenant Colonel Le Viet Tiep said in recent times, on the mass media, many pictures of the traffic police force of the PC08 Division, districts in the city have many achievements. Good, good examples, good deeds, crime prevention …

In the past month, there are many individuals and organizations of the traffic police force doing many practical things, showing the spirit of serving people. These mirrors were posted on social networks, the press, received many compliments, and beautified the image of the People’s Public Security Forces.

The PC08 Division and the traffic police force in the districts regularly contact with the people, also the face of the Ho Chi Minh City Police. Traffic police soldiers are people who often stand outdoors in the sun and wind, but they accept and obey their duties well.

Lieutenant Colonel Nguyen Dinh Duong, Head of PC08 Division, said that leaders of units, officers and soldiers must first perform well the assigned tasks, ensuring people participate in safe traffic in the area. TP. Besides, they also promote many examples in the attack to suppress crime, examples of good people with good deeds …

The two soldiers of the Traffic and Order Police Division of District 5 are Captain Nguyen Trung Hieu and Captain Do Huynh Trung Quan.When the people asked for help, the two men ran a special motorbike to lead the way for a car carrying pregnant women to “fall” on the car to the hospital faster on the morning of March 26.