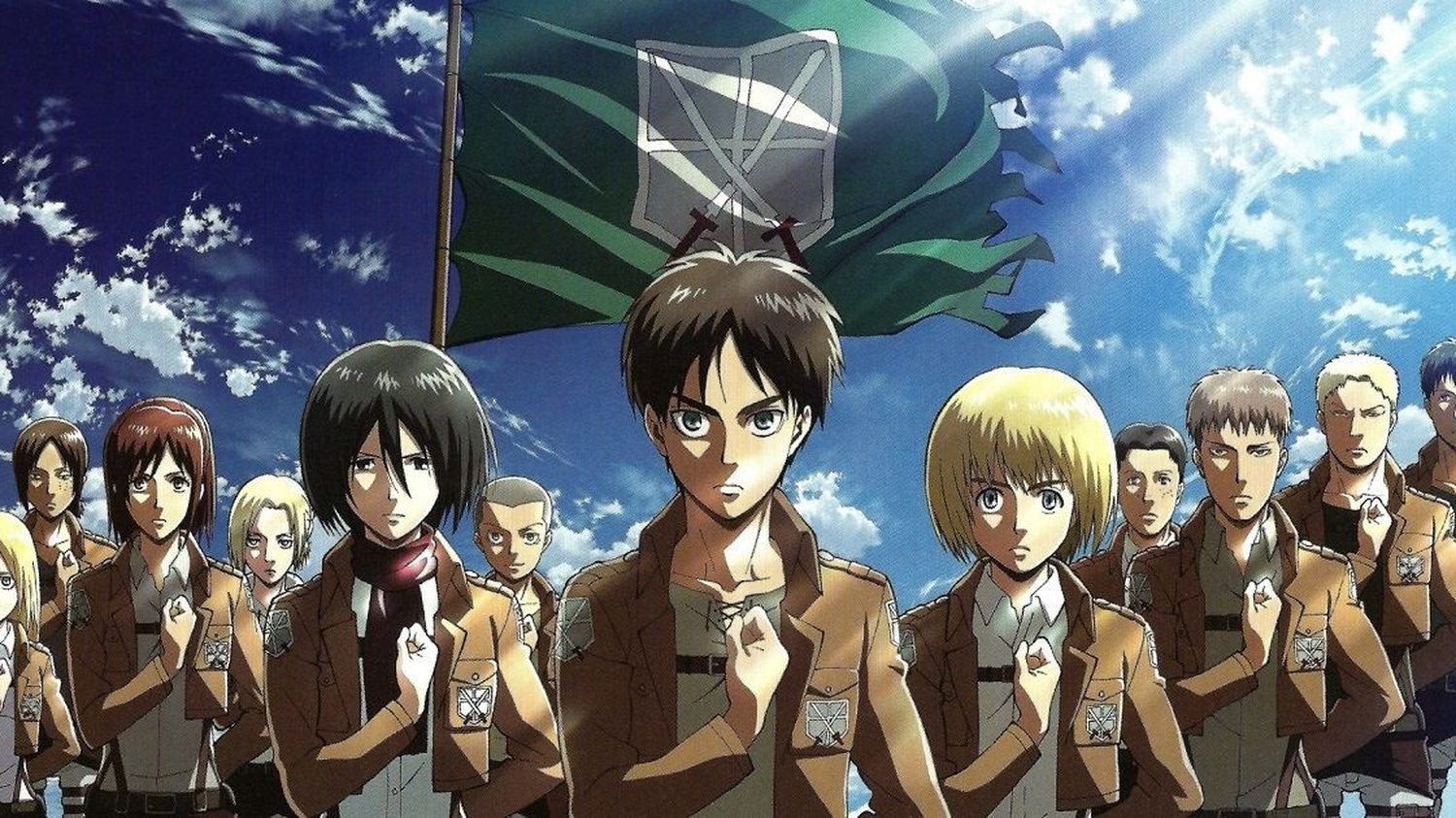 “Every Sunday at 6:45 p.m., it’s my meeting”, says Bastien, 24 years old. Each week, the young plumber who lives in Marseille connects to the platform Wakanim to discover the latest episodes of The attack of the Titans, Shingeki no Kyojin in original version. A manga published for the first time in 2009 and adapted in an animated version since April 2013. Its author, Hajime Isayama tells the story of Eren Jäger, whose community protects itself from the Titans, giant creatures who love human flesh, in s ‘encircling immense walls.

A visceral work with dark overtones, stripped of all humor and romanticism, which has enjoyed international success. Every week, thousands like Bastien eagerly await the release of the episodes of the animated version. On December 6, the launch of the fourth and final season of the series allowed Wakanim to achieve the best start in its history. Witness to the power acquired by this singular manga, the online video giant Netflix offers the first two seasons of the work to its users. “What I like is the strength of character of the characters. The plot also, there are a lot of twists and turns”, testifies Bastien, for whom The attack of the Titans is one of the most important Japanese works of the decade 2010. “I easily rank it in the top 10 of the best manga of recent years”. But what are the springs that make these adventures a real phenomenon of pop culture? Is the work really one of the centerpieces of the manga universe? Two specialists bring their elements of analysis.

The attack of the Titans is a shōnen, that is to say, a work that targets boys aged 8 to 18. The story then takes up essential codes of children’s literature, notably through the figure of Eren Jaëger, a teenager who lost his mother devoured by the Titans. “The orphan hero is a big theme like that. Harry Potter, Spider-Man are orphans. This allows the character to invent himself as he wants. There is no DNA dictatorship. We are on proven patterns but which resonate with a rather young readership “, notes Xavier Guilbert, editor for Atom magazine, dedicated to manga culture.

Eren is trending with over 150k tweets! pic.twitter.com/I2nesEYeBE

Eren Jaëger therefore lives reclusive in a post-apocalyptic medieval city within a community terrorized by its gigantic enemies but determined to reconquer the lands beyond the walls. As the Titans have just destroyed one of the three protective walls, the main character decides to join the army with two childhood friends. He becomes a member of the Fight against the Giants group. His destiny will push him to mature, to grow and to grasp the meaning of the collective. “There is an element that comes up a lot in shõnen, it is the initiatory journey in which we begin with a character who is ill about himself, who will succeed in recreating a kind of family, in being accepted and in understanding the importance of collaboration. The idea that you do not win alone is something that is present in all shõnen “, notes Xavier Guilbert.

But once these essential elements of culture shōnen posed, The attack of the Titans stands out for its unique style. The manga is unlike any other, with roughness and flaws, which in the end are its strength. “We have an author who has a vision that he seeks to convey and that he approaches in a raw way. He manages to overcome the frustrated side of his drawing, even if he improves. There is a very strong vision. “, says the editor of Atom Magazine. Shingeki no Kyojin constitutes the first work published by Hajime Isayama. And despite its resounding success, the manga was also noted for its sometimes rough drawings. “From a design point of view, we will agree that Isayama is not the best, approves Julien Bouvard, lecturer in the Japanese studies department of the University of Lyon 3. He graduated from a specialized school to become a mangaka, but very few professional designers emerged. Him, he does not draw extremely well, nevertheless he develops a rather exceptional scenario, with the capacity to bring twists in a surprising way “.

It is the work that takes the total counterpoint of all the people who claim that manga is only a marketing construct, thought for export.

And this is one of the essential points in understanding the success of The attack of the Titans. The manga is distinguished by a gripping, violent and abrupt plot which allows to overcome certain gaps in the drawing. “When we read the manga, we do not immediately realize what we have read. And then we have the revelation. We remember that a few pages earlier, we had already been told everything. reader looking at everything, it pushes us to look for the little beast “, details Julien Bouvard.

A gripping plot, which also stands out from other manga by the treatment of certain themes. “There is an unusual dark side, Xavier Guilbert notes. The way the characters die is violent and abrupt. There is something that takes it out of other works. It is an unexpected proposition, not polished “. By the absence of romantic or sexual intrigues, but also of humorous lines, The attack of the Titans frees itself from certain codes inherent in manga. “This idea of ​​taking characters, of never making them laugh, of always being in the first degree, that’s what I like, says Julien Bouvard. And there is another aspect that contrasts, there are no female characters with whom there is a romance. There is a kind of refusal to go into love themes “. The strength of The attack of the Titans therefore seems to reside in its ability to get out of the box, by making a work that the public cannot find anywhere else.

In 2019, the manga then passed the 100 million copies sold mark, 10 years after the publication of its first plot. What to pose as one of the major creations of the decade 2010? “This is the one we will remember. It is the most discussed work on the Internet, the most suitable in online memes and the most declined in very diverse forms (video games, live films, related series). There is a rather exceptional ecosystem “, describes Julien Bouvard.

However initially intended for boys, The attack of the Titans is very popular with girls. “There is something very neutral, very new and which contrasts with the classic production of manga. It is a series read and appreciated by readers. There is a very gendered popularity, with goodies consumed by women” , advances the lecturer.

A success all the more unexpected that unlike manga mastodons like Demon slayer or One piece, The attack of the Titans is not published in the pages of the weekly magazine Weekly Shōnen Jump, but in those of a more modest monthly, the Bessatsu Shōnen Magazine. While it is not among the five most drawn manga in Japan, it remains a beachhead of the genre. “It is one of the great successes of the 2010s. It is a manga that marks the level of the impact it has. We are on a work for the general public, which stands out for its raw side and for its not to have left the seraglio “, says Xavier Guilbert.

All the young people who read manga during the 2010s have read it. This is one of the series that will remain in their fan pedigree.

If he knew how to impose himself by taking side roads, it is because The attack of the Titans features references that speak to its readership, especially in Japan. “It deals with isolation, fragility, it echoes a Japanese society. The country went through The Lost Decade, which actually lasted 20 years, with a stagnation of purchasing power or the disappearance of the model of employment for life in the years 1990 – 2000. We went from a reassuring society to worrying “, underlines Xavier Guilbert. Fans of the manga thus find themselves in a hero who faces gigantic opponents and older than him. All in an anxiety-provoking atmosphere where the future is more than uncertain, death awaiting the protagonists at every moment of inattention. “The idea that things are collapsing and that the end of the world may be tomorrow is very present among the Japanese. In Attack on Titan, there is this question of how to resist”, continues the specialist.

Julien Bouvard also sees in the staging of a military youth leading a revolution, direct references to the history of Japan: “In the Japanese universe, it has already happened. The Meiji Revolution of 1868 is a bit like that. And more recently, in the 1930s, nationalist revolutionaries attempted several coup d’etat.tat. It speaks to the Japanese who are inhabited by these stories “. But the lecturer reads in a second way the story of the adventures of Eren Jaëger, whose community is enclosed by walls protecting it. “At the time the series comes out, there is a controversy surrounding the idea of ​​Japan not having entered globalization. Japan would be like the Galapagos Islands, with archaic social practices. There is perhaps a little of that in the manga, with a self-sufficient population that must discover the world “.

The work also contains many Western references, starting with the names of the protagonists, all of which sound Germanic. The action also takes place in a Western medieval imagination. “The landscapes are inspired by a German village”, refines Julien Bouvard. As for the Mahr Empire founded by the Titans, it appears as a metaphor for the Nazi regime. “It is an autocratic power, with segregation against a population that it discriminates for genetic reasons”, explains the professor.

Themes such as isolation, losses, mistrust of adults resonate with teenagers.

References which give a universal scope to the work, just like the themes it deals with. Even more during a pandemic. “With the crisis and the fact of being cloistered with us, we identify quite easily with characters who do not have the possibility of leaving their walls”, considers the lecturer.

A true pop-culture UFO, The attack of the Titans has managed to cross the walls and establish itself as one of the most striking manga of the 2010 decade by universal themes and historical references that it treats with singularity. A work which will know its conclusion this year. Hajime Isayama will publish the latest adventures of Eren Jäger and his accomplices on April 9.