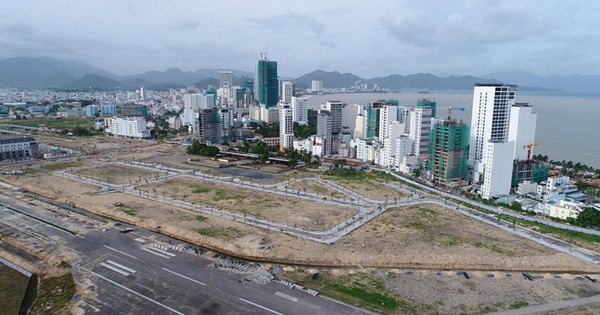 
: Arduous handling of the consequences

At the end of 2020, the Government Inspectorate has inspected the observance of policies and laws related to BT projects (build – transfer) using the settlement land fund at Nha Trang airport area. Khanh Hoa province. Up to now, the results of this inspection have not been announced.

Project “standing cake”, investors pity This is the project that Newspaper Workers

informed that, from October 2016, the People’s Committee of Khanh Hoa province signed a decision to recover 62.3 hectares of land in the area of ​​Nha Trang airport to assign, lease land to Phuc Son Company to implement the project of the urban center. Nha Trang market – services – finance – tourism (part of the old Nha Trang airport area) including subdivisions 2A, 2 and 3. However, in 2017, the Provincial People’s Committee authorized the project management units. of the province signed a BT contract for 3 traffic projects with Phuc Son Company, including: Ngoc Hoi intersection; Ring road connecting Ngoc Hoi intersection; routes, intersections connecting to Nha Trang airport. In February 2018, after additional adjustment, 3 BT contracts with a total value of approximately 3,562 billion VND. All 3 BT projects were not auctioned but appointed as Phuc Son Company.

According to Phuc Son Company, progress of BT projects is delayed because the authorities have not cleared and handed over the site to investors. Meanwhile, business (DN) funding 100% to implement. The construction volume of these BT projects has yet to be finalized by the PPC.Another project that also takes land “gold” is Khanh Hoa Radio – Television (PT-TH), located at 70 Tran Phu sea road with an area of ​​about 8,000 m2. 2

Also deadlocked exit. Accordingly, on February 7, 2018, Khanh Hoa province signed a BT contract with Nha Trang Orient Co., Ltd. to do 2 projects, which are the antenna posts of Khanh Hoa Radio and Radio Station in Vinh Ngoc Commune, Nha Trang City. Trang with a contract value of about 75 billion and the office of Khanh Hoa Radio and Television Station in An Binh Tan urban area, Phuoc Long ward, Nha Trang city with a contract value of about 123 billion VND. Up to now, the investor has completed these 2 projects to put into use with a total cost of more than 200 billion VND but has not been paid, while the headquarters of Khanh Hoa Radio-TH is vacant.In addition, the BT project of Nha Trang Technical and Technology College has a payback of 27,300 m 2From the old office of the school located at the front of the sea (No. 32 Tran Phu, Vinh Nguyen ward) since 2014, the People’s Committee of Khanh Hoa province signed a BT contract with Vinaminco Khanh Hoa Joint Stock Company. Although the land has not been allocated, the investor is completing the procedures to do the Sunshine Marina Nha Trang project. Or with the BT project Khanh Hoa Medical College located in the center of Nha Trang City with an area of ​​nearly 5,000 square meters 2

: Arduous handling of consequences – Photo 1. The old Nha Trang airport area was assigned by the People’s Committee of Khanh Hoa province to Phuc Son Company for the infrastructure Must wait for the Government

Involving the handling of inspected and inspected projects; BT project showing signs of violation was prosecuted by Khanh Hoa Provincial Police, reporter of the Newspaper

There was a written request to the People’s Committee of Khanh Hoa province for information, but there was no response.

Meanwhile, in the direction of solving problems related to the content of payment of 3 BT contracts with Phuc Son Company, Khanh Hoa Provincial People’s Committee said that while waiting for the official conclusion of the Government Inspector, the Provincial People’s Committee has been assign the Department of Natural Resources and Environment to carry out the procedures to complete the determination of land use levy in October 2016 (the time of land allocation) and November 2017 (the time of signing the contract. BT). If necessary, this department will invite a number of independent consulting units to participate.

Mr. Nguyen Tan Tuan, Chairman of Khanh Hoa Provincial People’s Committee, said that regarding previous BT projects, the province must now report specifically to the Prime Minister for consideration and settlement. Public land plots will be auctioned, the proceeds will be paid for BT projects and also interest rates for enterprises to invest.

According to Mr. Pham Van Chi, former Chairman of Khanh Hoa Provincial People’s Committee, the handling of projects according to inspection conclusions as well as BT projects is still in the process of investigating and clarifying mistakes … causing many difficulties for economic development of the province as well as enterprises. “Correct, but correct, but must be corrected slowly. That means for businesses to have time to overcome and to develop. Living is thanks to the budget, but the budget is basically contributed by the enterprises. If correcting, destroying all Enterprises are not correcting mistakes but adding mistakes Start-ups, if they see that, will not dare to start a business anymore With this difficulty, it requires the government to do step by step, skillfully to solve. projects to recoup lost budgets, and extend the payment time for businesses to facilitate development “- Mr. Chi stated.

Mr. Chi said that the consequences of these mistakes last no less than 10 years because the recovery and remedy will be very difficult to satisfy the interests of investors with the state. The leaders of the province in the coming time will take that as an example, do not dare to resolve new issues to implement local economic development.

Difficulty projects out of budget According to the report of the Department of Planning and Investment of Khanh Hoa province, by December 2020, the province has a total of 581 investment projects from non-budget capital sources, of which 109 projects are invested by foreign countries. . Through a review, the Department found that the projects still have many problems, notably, some areas do not have general planning, subdivision planning or have these plans but are no longer appropriate. The updating and adjustment of planning (land use, construction, planning of sectors, fields …) have not been synchronous, leading to a situation that many projects are consistent with land use planning but not suitable for construction planning, planning for branches and fields.

Therefore, the Provincial People’s Committee has directed departments, branches, localities and related agencies to quickly resolve and disassemble each project group. With the project group being inspected by the central government, the departments and branches urgently handle and overcome shortcomings and shortcomings and guide the investor to complete the procedures in accordance with the current regulations to soon continue the investment. build, put the project into operation.