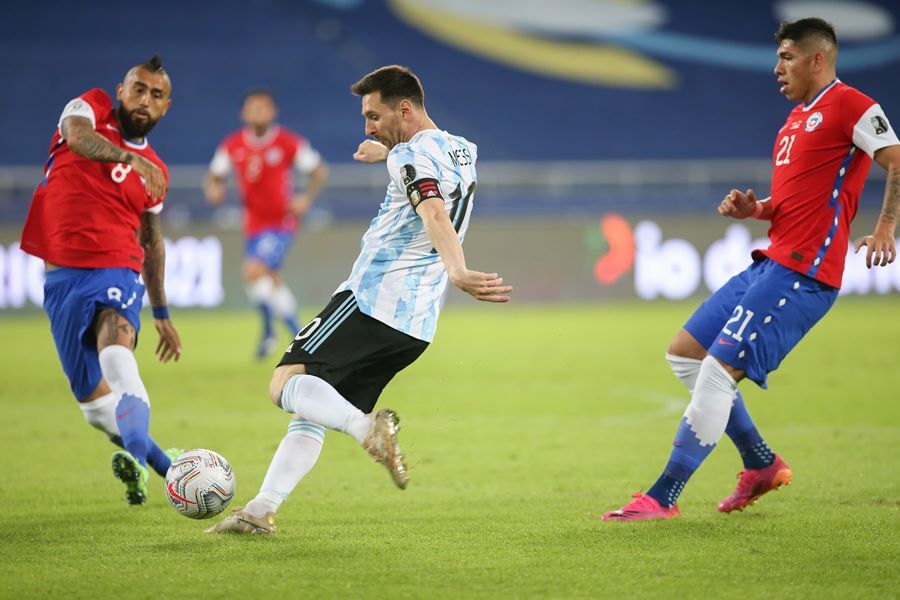 Lionel Messi’s exemplary free kick opened the scoring, but Argentina failed to protect the result when Chile held a 1-1 draw in the opening match of the Copa America.

*Here are the details of the events:

The match ended with a 1-1 draw, the opening of the Copa America was full of difficulties for Messi and his teammates.

Argentina is trying hard to attack to find the opportunity to score the second goal but can not succeed.

The second half had 7 minutes of injury time. The Argentine players are organizing to press the pitch continuously in search of the decisive goal.

After a messy ball in the Chilean penalty area, Di Maria shot the ball over the crossbar to goalkeeper Bravo.

Messi fished the ball into the penalty area as if clearing for Nicolas Gonzalez, but the player wearing the number 15 shirt of Argentina headed over the bar in a position not to be accompanied.

After a good challenge from his teammates, Messi shot from outside the box forcing goalkeeper Bravo to block. Argentina is pressing the pitch to find the second goal.

On the 11m mark, Vidal ended up being blocked by goalkeeper Martinez, sending the ball off the bottom edge of the crossbar. Vargas headed in to equalize 1-1 for Chile.

A Chilean attack from the center, Vidal penetrated the box, he tried to finish and fell during a challenge with Nicolas Tagliafico. After consulting VAR, the referee blew a penalty for Chile.

Argentina organized a quick counter-attack, Messi opened the ball down for Lautaro Martinez before M10 went down to make a shot to hit the Chile defender’s foot.

In the first minutes of the second half, the Chilean players actively pushed the squad to press Argentina to find an equalizer.

The second half of the match begins.

The first half ended with a score of 1-0 temporarily in favor of Argentina, thanks to Messi’s exemplary free-kick.

The first half had 3 minutes of extra time.

Another chance for Argentina, but Lautaro Martinez did not finish well, missing the opportunity to make it 2-0 for the tango dancers.

Argentina was awarded a free kick near the Chilean penalty area, as usual Lionel Messi was still the one to take the kick. Albiceleste’s captain drew a beautiful curve that hit Bravo’s net.

The opportunity was for Chile, with Vargas’s kick and shot to send the ball wide of the post along the Argentine goal.

Albiceleste are the ones holding the ball more, the number of chances created is also slightly better than Chile.

Another chance for Argentina, Nicolas Gonzalez escaped to face goalkeeper Bravo but the shot went right into the position of the former Barca goalkeeper.

From his teammate’s ball into the Chile penalty area, Nicolas Tagliafico used his chest to return it to Messi so that the Argentine captain could shoot a one-touch shot to send the ball across the opponent’s goal.

The first few minutes of the match took place at a slow pace, the two teams entered the game quite cautiously.

Colombian referee Wilmar Roldan blows the whistle for the match between Argentina and Chile to begin.

– Argentina won 2, drew 2 and lost 1 against Chile in the last 5 confrontations