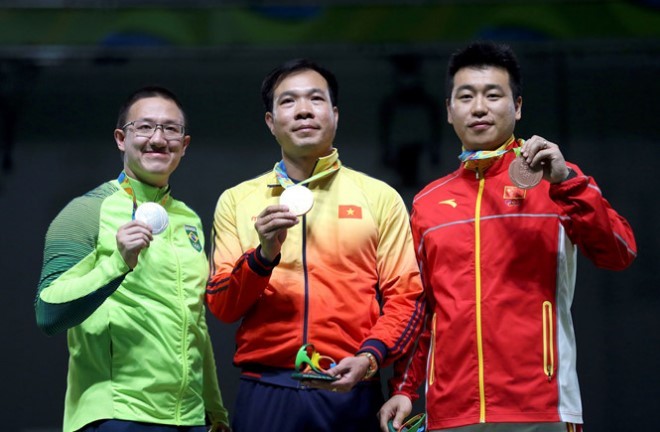 In the first time winning the right to the final of the men’s 10m air pistol event at the Olympics, Hoang Xuan Vinh and the host country’s gunner Felipe Almeida Wu created a breathtaking chase.

Drama is pushed to the extreme in the last two rounds. In the penultimate ball, Xuan Vinh did not shoot well, so he dropped to second with 0.2 points less than Felipe Almeida Wu.

In the decisive bullet, Felipe shot 10.1 points, while the army gunner aimed carefully, stuck the bullet near the center to reach 10.7 points and won the gold medal with 202.5 points. Hoang Xuan Vinh is only 0.4 points better than the host country’s ADC.

Vietnam’s ADC has overcome the pressure of the host audience, to the top competitors in the world, including the reigning world number one in this content Felipe Almeida Wu and 2008 Olympic champion Pang Wei to get to the top of the podium.

Hoang Xuan Vinh’s victory opened a new page in Vietnamese sports history with the first gold medal in the arena of the Summer Olympics.

After 5 years, the gold medal of gunner Hoang Xuan Vinh continues to be a great motivation and encouragement for athletes of the Vietnamese sports delegation preparing to compete at the Tokyo Olympics.

On July 18, the Vietnamese sports delegation set off to Japan to compete at the Tokyo 2020 Olympics.

Schedule of matches of Vietnamese sports delegation at Olympic 2020

VietNamNet updates the detailed schedule of athletes and competitions of the Vietnamese Sports Delegation at the Tokyo 2020 Olympics.