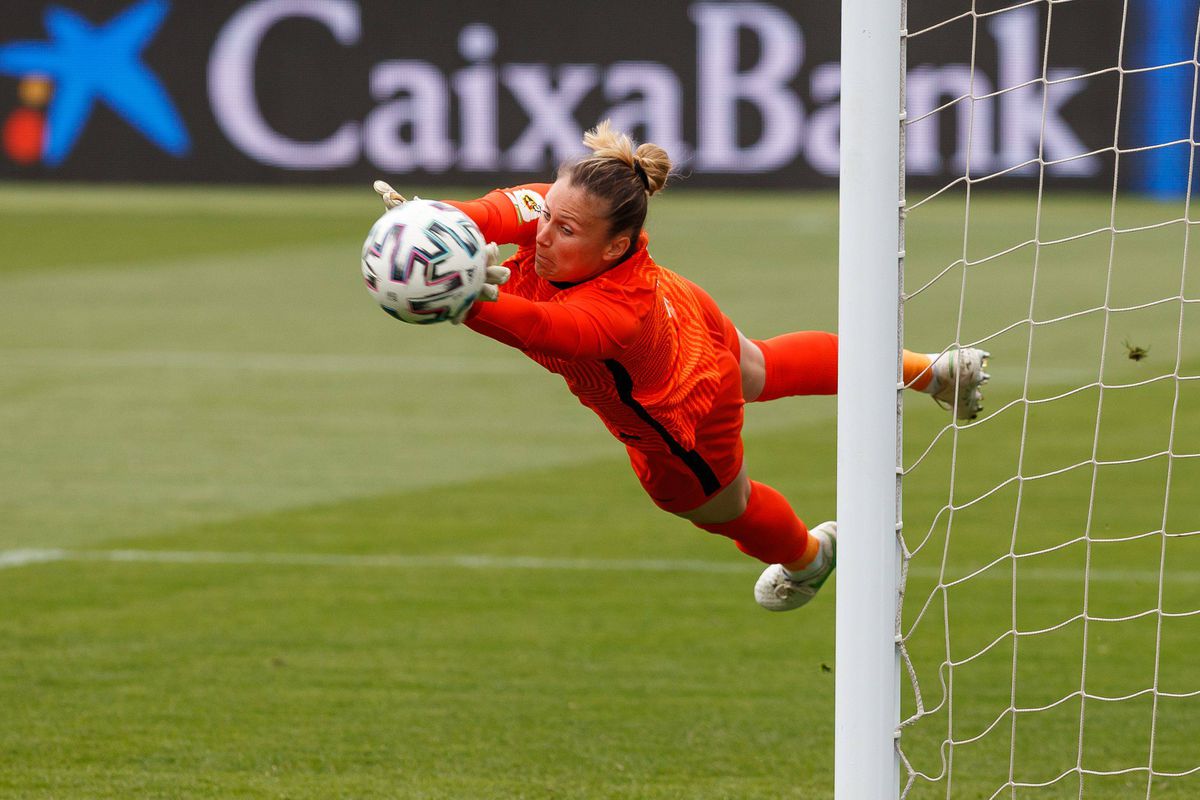 Sandra Paños (Alicante, 28 years old) made her debut in Levante’s goal 10 seasons ago. First she won the title, then she became one of the best goalkeepers in Spain. And Barcelona, ​​which at that time was only fishing for talent in the League, did not let it escape. In 2015, he moved to Sant Joan Despí, just when Barça stopped winning. After four consecutive titles, the Catalans yielded to Athletic and Atlético. “I thought it was jinx,” jokes Paños; “However, in Europe we were fine.” Barcelona won the League again last season and this year they are in their fourth Champions League semi-final in the last five seasons. Always important, Paños never had such an outstanding performance as in this European Cup. He saved a penalty in the quarterfinals against Manchester City and, in the first leg of the semifinal against PSG (1-1), he excelled in a heads-up against Geyoro, who could have decided the game for the Parisians. “I also touched the ball in another one against one,” he recalls. This Sunday, against PSG and at the Johan Cruyff stadium (12.00, Barça TV and Esport 3), Barça is looking for its second Champions League final.

Question. Is it your Champions?

Answer. When the matches are between two teams of such high level, the goalkeepers always have a more outstanding performance. It participates more, there are no more explanations. Christiane [Endler, guardameta del PSG] he also played a great game. This kind of eliminatory, although it sounds very repetitive, ends up being defined by errors. Either they are errors of the goalkeepers, or they are in some loss that generates a transition.

P. How do you cope with the error?

R. I try to understand it as decisions that are made at a certain moment. It makes you angry, of course, but you have to put it down. Above all, after the game it has to be analyzed. But, in the end, although the whole team fits it, you always feel it as yours. A goal is like being hit by a stone.

P. Have you not received many stones in the league?

P. How do you explain that they have only scored five goals in 25 games? [El Barcelona ha ganado todos sus encuentros y ha marcado 127 tantos].

R. There is a personal factor and there is another collective. I used to try to do everything very fast, maybe even in a crazy way. Now I meditate on each move and look for the necessary pause to intervene in each action. And the group has been working much more physically for a year and a half. We do more and better field tasks and also the base of the staff has more experience. In addition, important players have been incorporated.

P. Are you bored at League matches?

R. If I don’t intervene, I think: ‘Jolín, let’s see if I can at least touch the ball with my feet.’ It happens, many times, that the first time I face in a match is a one on one, which is one of the most complicated actions for a goalkeeper. Over time I have improved a lot and I demand myself to be as perfect on my feet as on goal. I am looking to improve the way to find the free spaces and, of course, in the precision to execute it.

P. Is she more of a footballer than a goalkeeper?

R. I think so. In the league I am more libero than goalkeeper. My highest percentage of participation is through footwork. It is what it touches and I have had to accommodate myself to it. When I arrived at Barça I was neither so precise nor did I read the different situations of the game so well.

P.Why is it not recognized outside of Spain?

R. Maybe I have not been so decisive when it was time to be. But for tastes, the colors. Some will like me more and others less. I stay with the day to day and that the people here are happy with my evolution. Every year I have improved and I have become a more complete footballer. If the prizes arrive or not… there are many factors that can affect. Hopefully that day comes, of course. But I have been several times in the eleven of the Champions League. In a way that means that people like the way I play and how I stop.

R. As now women’s football is televised more, the quality of our players is seen more. Many times the rankings were made without really knowing what was happening. Many people voted because they knew one or another player, but without knowing the day to day or without watching every game. There were players who had not participated practically the entire season and won the awards for the best of that year. We still need to see more of women’s football, but I think that with the visibility that has been gained in recent times, they are going to realize that in Spain there are very great players. In the very near future we will have individual awards.

P. Lyon and Wolfsburg, the last two finalists in the Champions League and now eliminated, no longer dominate women’s football?

R. As Alexia said, I think that in this newspaper, everything is very even and anything can happen. Since last year we all feel much better, much stronger and above all faster. And all that with more experience. But there is also another very important factor, in football there are cycles. And now it is our cycle. We are competing well. Perhaps the Lyon and Wolfsburg cycle is over and getting a team like this back is not easy. It also happened to Barça. They went from winning the League four seasons in a row to not winning it for another four years.

P. How do you see the return to PSG?

R. We are different teams, we like to have the ball and give speed to the game. We have a more associative game, while theirs is more direct. They have three beasts up there, who are very fast and are a little better physical. In their field they came out with a line of five. Then they changed it. Everything will be different here. They are going to come and try to score a quick goal.

P. Unlike 2019, when you were finalists, this year can Barça win the Champions League?

R. If only. He tells me and I get goose bumps.