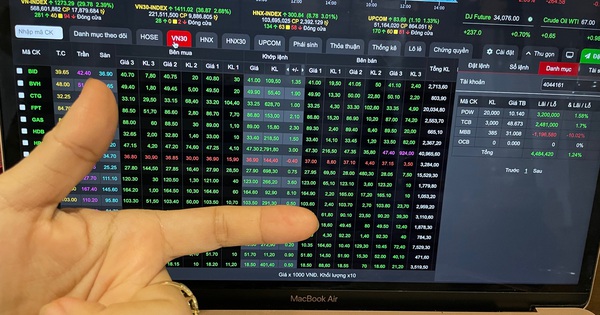 Liquidity at the end of the session was pushed up, the total trading value of the whole market reached over 20,270 billion dong, of which on HOSE was more than 17,870 billion dong.

The market movements in this session created many emotions for investors, when in the morning, the market opened with the majority of red colors. Near the end of the morning session, VN-Index sometimes dropped more than 16 points, the liquidity was also at an average level because of the reticence of investors.

However, in the afternoon, the market was excited, near the end of the session, the strong buying force at high prices made the index gain strongly. Many codes within the session reversed from red to purple (ceiling). Specifically, SSI, increased to the ceiling price, to 52,700 dong/share, with a large amount of overbought shares. Many other stocks also increased strongly such as HCM, SHS, VND….

In this session, most blue-chips, especially financial and banking codes, turned to rise again. Specifically, CTG increased to 33,250 dong/share, TCB to 49,500 dong/share… Notably, after 1 session of deep decline, today’s session, MWG shares of Mobile World, the stock that owns the Cake chain Hoa Xanh increased strongly again, to 164,600 dong/share when it increased by more than 8,000 dong/share.

Analysts said that when the market fell deeply in the previous session, the sell-off in this session did not take place. Many stocks fell deeply, buyers were afraid of losing goods in their accounts, so they bought…

Especially, this session, VAB shares of Viet A Bank (VietABank) offered UPCoM with a reference price of 13,500 VND/share, equivalent to the market capitalization of VietABank which reached more than 6,000 billion VND. VAB shares rose to the ceiling price of 40% to VND 18,900/share in the opening session.