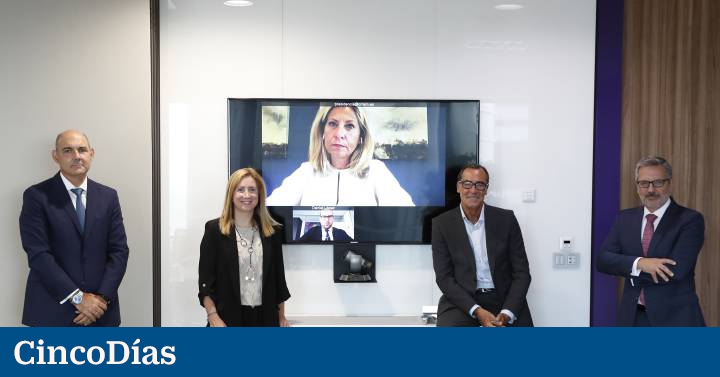 The European directive on the distribution of insurance (IDD, for its acronym in English) is insufficient and has not arrived in time in Spain. The European standard, of 2016, entered into force in Spain last February, just before the declaration of the state of alarm as a consequence of the Covid-19 pandemic that catalyzed the changes that were already brewing in the sector, which it transforms in a fully digital omnichannel ecosystem. However, the rule has fallen short and has failed to lay the foundations to regulate the online world that the coronavirus has left and that has come to stay.

This is how the sector specialists have valued it in a hybrid breakfast, face-to-face and telematic, organized by Five days and KPMG under the title of The impact of IDD on the insurance distribution model in Spain, to analyze the scenario in which the insurance sector must move after the transposition of the European directive. The main purpose of the IDD, which has yet to be validated in the Congress of Deputies, is to protect insurance consumers by establishing greater transparency and information. However, it does not adapt to the current level of digitization that the sector and society have reached.

“The regulations are projected on a totally different market context, the ecosystem of competitors is much more complex and it gives the impression that regulation is lagging behind the evolution of the business,” explains Francisco Uría, partner responsible for the financial sector for KPMG EMA, main partner of KPMG Abogados and moderator of the meeting.

Experts believe that the IDD does not provide relevant advances in the insurance playing field. Since the first draft began to be debated in 2016 until now, everything has changed. This is indicated by Daniel López Rodríguez, head of VidaCaixa’s corporate legal advice. “The law has been transposed as it has been possible and we have been the last in Europe to incorporate it,” recalls the lawyer, who assures something shared by all those present at the meeting: “The regulation has fallen somewhat short if we compare it with the reality and the Covid has not done more than to demonstrate it ”. The rule, according to López, “is four years late.” “To accompany the digitization process of the sector we need a more modern IDD and adjustments in the insurance contract law, which is a brake on innovation processes in the sector”, he adds.

Pilar Galán, director in the financial services area of ​​KPMG Abogados, with experience in regulatory implementation processes, explains that “when the IDD began to take shape it was designed to regulate a less developed digital world than that of 2020, that is why the standard it has been left behind ”. According to Galán, the law introduces some guidelines for online distribution but none that regulates the customer experience in an entirely digital world.

“The regulations were born out of date,” explains Óscar Merino, director of the legal advisory for insurance and social security of Santander Spain and secretary of the board of directors of Santander Seguros. “The compendium of obligations that the standard includes do not make sense in a world where immediacy prevails,” he adds. Experts point out the importance of finding a principle of proportionality for those coverages that are born to adapt to the specific reality of the consumer at a specific moment (such as the insurance that covers the trip of a few minutes by public electric bicycle) and that do not require such excess regulation. “We need a regulatory evolution in very diverse areas”, adds the VidaCaixa lawyer.

IDD recognizes the presence of new technology players. They are the insurtech –startups that use technology to create new ways of offering insurance to the client– and the big tech –large globalized technology companies such as Google, Amazon, Facebook and Apple that are beginning to enter the sector.

“The new players represent different challenges, the insurtech have arrived to collaborate, but the big tech has a more powerful disruptive capacity,” says López, who gives an example: Google has just announced that it will partner with a reinsurer to offer health insurance . “There may be the challenge, the competition and the change,” he explains. Carlos Falcón, CEO of Ibercaja Mediación de Seguros, for his part, goes further: “If insurtech change the game board in the world, big tech turns it upside down,” he says.

“We are witnessing the birth of insurance companies, distributors and large digital operators that should be regulated by the same rules,” says Merino, adding that “IDD provides legal certainty” to the crystallization of this new environment. However, Elena Jiménez de Andrade, president of the College of Insurance Mediators, believes that European regulations should have deepened in greater regulation of technology operators. “This rule falls a little short and a little far from what the client needs,” Jiménez abounds. “It’s fine to regulate web comparators, but we could have gone a bit further.”

VidaCaixa’s lawyer agrees with the rest of the table and adds that “the IDD regulates the structures that already existed in Spain for a long time, the comparators, but does not foresee new formulas.” In any case, López believes that the insurtech are not a threat because they cannot replace the agents already present in the sector. “They have an auxiliary function, although also disruptive, but only because they help to continue evolving,” he says. According to the expert, technological platforms will gain greater weight over the years, “as has already been seen during the pandemic”, in the direct distribution of insurance.

Impact of the coronavirus

The Covid-19 virus has accelerated the digitization of the sector that was already guessed in the long term. Digital distribution of insurance and non-face-to-face channels has gained momentum since March, although the business ecosystem was already prepared for it long before. “The pandemic has made us aware of the importance of being on the client’s mobile to adapt to their needs, that is positive,” says Jiménez.

Merino says the business rose to the occasion during the toughest months of the health crisis. “The confinement has put us to the test and has served for the sector to implement in record time the digital offer that it had planned for the medium term,” says the Santander advisor. “The insurance sector has made a titanic effort to cover claims,” ​​he adds.

However, despite the push that digitization has taken to overcome restrictions to curb the virus, the insurance business faces a challenge: to adapt to a 100% digital customer in a highly regulated landscape where it must comply with large number of documentation requirements.

“There are people who have lost fear and prejudice, so they are going to demand more in the digital field,” explains López. “The future is omnichannel, everything can be done through all channels, when the client tries the digital model it is difficult to ask him to call by phone or go through bureaucratic channels, as has happened until now,” he explains. Falcón, for his part, adds that “the pandemic has helped us to put ourselves at the top of the line, the customer experience now is not in the office, but in the app or on the web.”

The pandemic has changed the way in which the consumer relates to the company and, on some occasions, has managed to move from one extreme (totally face-to-face) to the other (100% digital). “You have to be prepared for the flood of digital clients that will arrive now and that we didn’t have before,” says López. Furthermore, the perception of coverage has also changed. “The consumer has understood how important it is to understand well what is the risk covered by the insurance that he has contracted, so we have to value the advice, accompany him and give him comprehensive coverage, but not more than necessary”, clarifies the VidaCaixa expert.

Insurance products are also evolving towards more modern models, contemporary with current trends, which are influenced by the change in risk appreciation after the health crisis. “The Covid has taught us that we are more exposed to uncertainty than we thought, therefore, before making any decision, we worry much more than before about the insurance that will cover it,” says Merino. “Our obligation is to complete the products and expand the offer to meet the new needs that human and commercial relations will demand after the experience of the pandemic,” concludes the Santander expert.

“Adapt or die”, adds Falcón: quite a challenge. Accommodating the post-Covid era in the insurance sector is an extra difficulty due to its demanding regulatory framework. “To what extent does regulation become a brake on innovation when it comes to responding in an agile way to customer demands?” Asks Uría. And Galán answers: “We have to go a step further if we want to combine agility and guarantee consumer demands”. According to the KPMG lawyer, the IDD does not include details on how to combine the two aspects, so it predicts that, for a time, the “self-regulation” of the sector will prevail.

Context. Spain was the last EU country to transpose Directive 2016/96 of the European Parliament and of the Council on insurance distribution through a royal decree law. Although the bill has been fully in force since February 4, parliamentary groups have submitted amendments to the text, which has prevented its final approval in the Congress of Deputies, where it continues to be processed. Therefore, there is still some uncertainty, since, although no major changes are foreseen, certain developments do seem foreseeable.

objective. Guarantee fair competition between all information and distribution channels, equal protection for the policyholder, greater transparency and information in the marketing of both the products offered and the advisory process or the remuneration process of intermediaries and companies insurers.

More regulation. The documentation that must be provided before contracting insurance is expanded, the information that includes the characteristics of each policy and its coverage is standardized. The type of advice to be provided for each type of product is specified, as well as the procedure for clients to be able to process complaints and resolve conflicts.

What’s New. It extends the scope of application to all insurance distributors and not just to traditional mediators (agents and brokers). The IDD includes insurance and reinsurance entities and complementary insurance intermediaries (agents that distribute ancillary insurance and comparators) to protect the client in the same way regardless of the channel they have chosen to purchase their insurance. Whether there is advice or not, the law requires that the consumer be tested on their needs.

Insurance-based investment products. The norm increases the obligations of information and conduct during the commercialization of this type of products and forces to periodically evaluate the suitability to invest of the client. In addition, it substantially increases the penalties for breaching these requirements of at least five million euros or 5% of the annual turnover of the entire company.